The Armed Forces Day flag is now flying outside City Hall as Southwark prepares to host a parade by hundreds of service men and women. 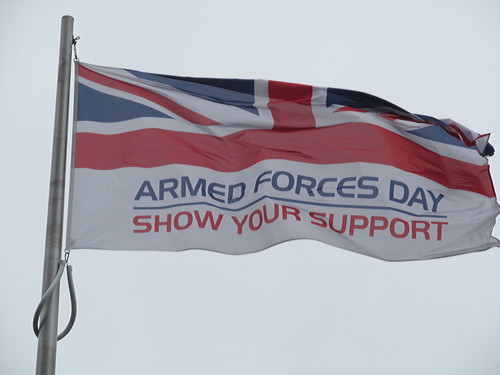 Mayor of London Boris Johnson was joined by members of the London Assembly, the Royal Navy, Army and Royal Air Force at Monday's flag raising ceremony.

Accompanied by musicians from the Royal Anglian Regiment, the Armed Forces Day flag was raised by two cadets and will continue to fly outside in the run-up to Armed Forces Day next Saturday.

Southwark is hosting the capital's biggest Armed Forces Day parade with a major military parade from St George's Circus to Geraldine Mary Harmsworth Park this Sunday, the day after the nationwide day of recognition for the armed services.

Mayor of London Boris Johnson said: "We are raising the Armed Forces Day flag in honour of all the brave men and women who tirelessly serve their country to keep us safe, in particular those serving in Afghanistan.

"Our servicemen and women are a key part of all London's communities and today's event is particularly important following the shocking events in Woolwich. This was an appalling, unforgivable act and no words could ever successfully convey the sadness and horror felt across the capital.

"Londoners continue to come together during difficult times, and as a world city that leads by example we are rightly dedicated to supporting members of the armed forces and their families during and after their time in service."

Darren Johnson, chair of the London Assembly, said: "As patron of the City Hall branch of the Royal British Legion I am proud to remember the service and sacrifice of veterans and serving personnel at our flag raising ceremony.

"As chair of the London Assembly I am pleased to underline our commitment to supporting our Armed Forces and honouring the promises we have made in our Armed Forces Community Covenant. This year's flag raising will be particularly poignant following the awful murder of Drummer Lee Rigby. London's reaction to those events in Woolwich demonstrated the gratitude, esteem and unity of Londoners in support for the men and women of our armed services."

Sunday's parade is set to be one of the largest in Southwark since the end of the Second World War with approximately 600 service personnel and veterans taking part.

The march will be led by the Band of The Life Guards with three other military bands on parade including the Pipes and Drums of the London Regiment, the Woolwich Air Cadets Marching Band, and the Army Medical Services Band.

The general salute will be taken by Sir David Brewer, Lord Lieutenant of Greater London.

Cllr Ian Wingfield, deputy leader of Southwark Council. said: "Never before has Southwark had the opportunity to celebrate the heroic efforts of our serviceman and women on this grand scale. The recent tragedy in Woolwich makes it all the more necessary to show our continual support for the armed forces and to resist all extremist beliefs."

He added: "This event will not be complete without the support of our residents. We need as many local people from across the borough to come together in solidarity to both acknowledge and celebrate the contribution of the armed forces to the life of the nation and the world."

A Ceremony of Recognition and Commitment will follow the parade at 12 noon in Geraldine Mary Harmsworth Park. It will be led jointly by the Bishop of Southwark, Rt Revd Christopher Chessun and the Roman Catholic Bishop of the Forces, Rt Revd Richard Moth. In a public display of interfaith solidarity an Act of Commitment will be led by the Chief Imam of the Muslim Association of Nigeria, Alhaji Tajudeen A. Salami.

The afternoon programme of family entertainment from 1pm until 4pm includes, military displays (Second World War vehicles and modern field ambulances), and a performance by the Military Wives Choir (South London and RAF Halton) at 2pm.

The 40-piece Lambeth Wind Orchestra and the 40-piece Southwark Concert Band will also perform, and The Cherry Belles (Andrews Sisters Tribute Act) will perform a nostalgic programme of wartime music and a selection of jazz and cabaret favourites.

Beefeaters from the Tower of London and Chelsea Pensioners from the Royal Hospital Chelsea will also be in attendance.