Southbank Centre chairman Rick Haythornthwaite is to cycle from Durham to London in 24 hours to raise money for the appeal to complete the £2.3 million restoration of the Royal Festival Hall organ. 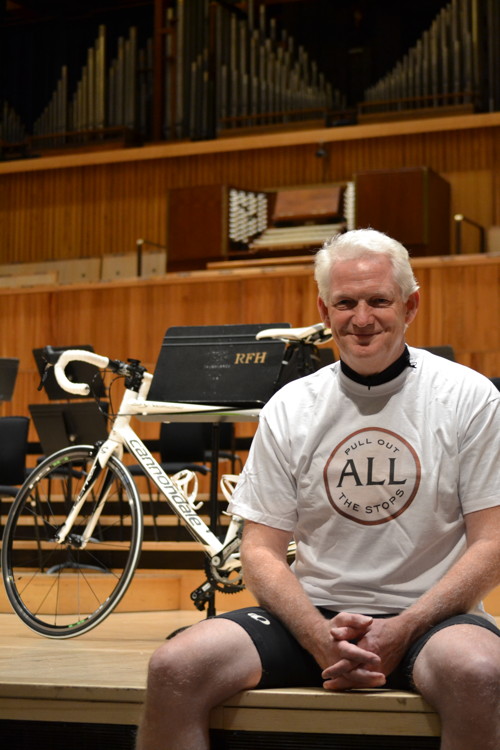 Rick Haythornthwaite will be joined by five friends to ride the 266 miles and fundraise for the final amount of Ł100,000 to restore the Royal Festival Hall's organ to its full glory.

At 12 noon on 20 July Rick Haythornthwaite and his team will set off on the 24-hour bike ride from the Harrison and Harrison organ building workshop in Durham to the Royal Festival Hall.

The team will bring one of the final organ pipes from the Harrison and Harrison workshop to be installed in the Royal Festival Hall.

Harrison and Harrison, the company that originally built and installed the Royal Festival Hall organ in 1954, is responsible for the refurbishment and reinstallation of the organ.

Work to return the final third of the instrument to the RFH will begin on 19 July.

The Heritage Lottery Fund awarded Ł950,000 towards the final phase of restoration of the organ in 2010.

"This unique instrument is one of the most important concert hall organs in the world, which is why it's so important to restore it to its rightful position in the Royal Festival Hall," said Rick Haythornthwaite, chairman of the board of governors at Southbank Centre.

"We are extremely grateful to the Heritage Lottery Fund for their generous grant and for the extraordinary response we've received from the public to this fundraising appeal.

"As a result we just need to close that final gap with Ł100,000 left to raise. Cycling the 266 miles from Durham to London in 24 hours will be a difficult task, but the restoration and fundraising appeal are both enormous challenges too, so it is fitting that we finish it off with an equally difficult trial!"

The organ will be fully tuned and completed in time for the start of Southbank Centre's Pull Out All The Stops Organ Festival on 18 March 2014. Next year also marks the instrument's 60th anniversary.

• You can sponsor the bike ride team at www.pulloutallthestops.org