The installation of the restored Royal Festival Hall organ has been completed. 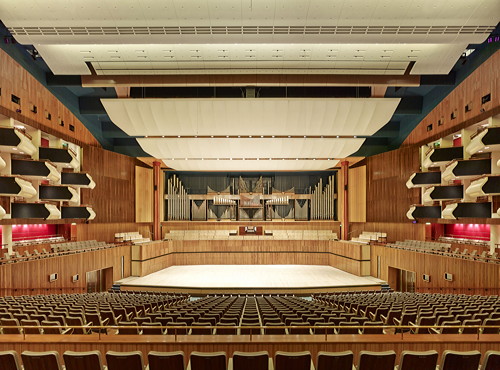 The installation of the Royal Festival Hall organ has been completed following its complete restoration by the Durham-based organ builders Harrison & Harrison.

The instrument, comprising 7,866 pipes, will now be tuned and the voicing balanced ahead of its reinauguration at the Pull Out All The Stops organ festival which begins on 18 March 2014.

The full Ł2.3 million required to restore and reinstall the instrument was raised through significant grant from the Heritage Lottery Fund (HLF) – which awarded the project Ł950,000 in June 2010 – and donations of Ł1.3 million from the public.

Southbank Centre's chairman Rick Haythornthwaite and his team of cyclists finished their sponsored 24-hour ride from Durham to London on Sunday 21 July, raising the final Ł100,000 to reach the campaign's target.

Pull Out All The Stops Festival – An Organ Celebration, which runs from 18 March to June 2014, also marks the instrument's 60th anniversary since it first resounded in 1954.

For the first time in almost a decade, visitors will be able to hear major works for the organ performed by Southbank Centre's Resident Orchestras such as: Poulenc's Organ Concerto; Saint-Saëns' Organ Symphony; Strauss's Also sprach Zarathustra and Alpine Symphony; and Janáček's Glagolitic Mass.