A seven-storey ad banner promoting the regeneration of Elephant & Castle has been installed on the side of one of the blocks of the Heygate Estate. 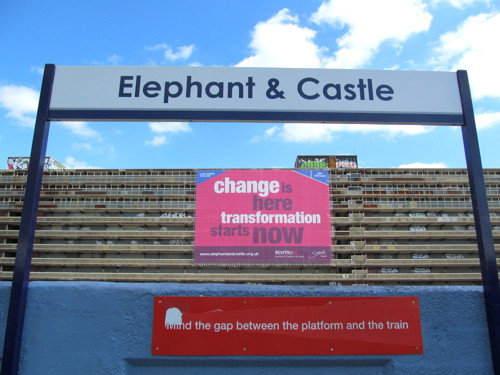 The banner, which is 25 metres wide and 17.5 metres high, has been installed on the Claydon block by developer Lend Lease and bears the slogan: "change is here – transformation starts now".

It is designed to be seen from Elephant & Castle Railway Station and also carries Southwark Council's logo and branding.

Lend Lease has yet to receive advertisement consent from the council's planning department to permit the installation of the banner.

In a letter to planning officers, Lend Lease's agents say that the purpose of the banner is to "inform the local community that the Heygate masterplan regeneration is now in full swing".

According to the letter, demolition of the remaining parts of the estate will begin this autumn and last 17 months.

Claydon, the block which carries the banner, is due to be demolished in January 2014.

Lend Lease expects to earn its first profits from Elephant & Castle by 2016, even though its redevelopment of the estate will run until 2025.