Free wireless internet access could be introduced in public areas across the borough under plans announced by Southwark's opposition Liberal Democrat councillors. 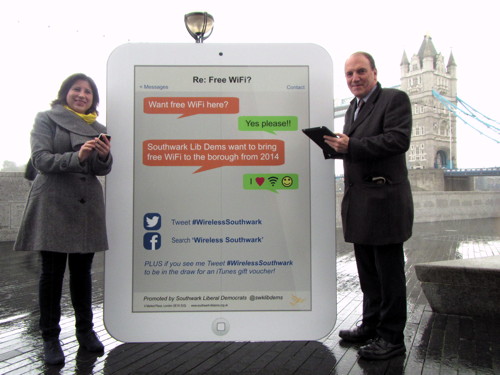 Free wifi would be introduced along the riverside and on major highways such as Borough High Street if the Lib Dems win control of Southwark Council in next May's elections.

Southwark Lib Dems say that they would sign a deal with an internet service provider who would install wifi hardware on lampposts and buildings and run the scheme.

Users would be given a minimum of one hour's free access, after which they would have the option of paying for more time. Advertising and sponsorship would also be sought to keep costs to the council to a minimum.

"It is vital that the borough is at the forefront of technology and well-suited to the needs of those living and working here, which is why we are putting forward these exciting new proposals to create a Wireless Southwark."

"Southwark Liberal Democrats are on the side of residents and businesses who want to propel the borough into the digital age by offering free public wifi for everybody living and working here."

Free public wifi is already available across the river in the City of London under a deal between the City corporation and The Cloud.

Labour-run Camden Council recently signed an agreement with Arqiva to provide public wifi in that borough.