Stephen Humphrey's history of the Elephant & Castle has been published after a quarter of a century of research. 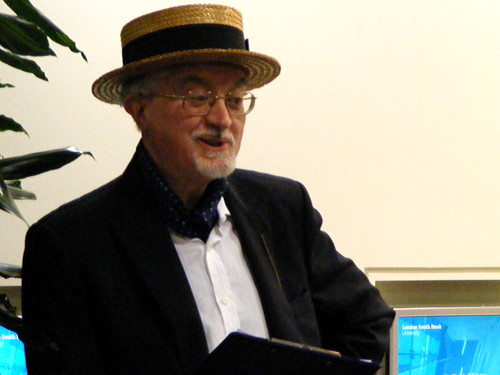 The author spoke about his long task during a reception hosted by London South Bank University to mark the achievement. The event was in the Technopark building which stands on the site of South London Palace music hall.

"I have not hurried writing this book," said Stephen. "Elephants are lumbering creatures as we know and my thoughts have lumbered along since the late 1980s."

He said that thanks were due to people who had forgotten that they had helped but the evidence was "fully sifted". He described the Elephant & Castle as "full of fun".

The book includes an examination of the depictions of elephants and castles in art starting with a Syrian example from the third century BC.

Humphrey's book concentrates on the Elephant's heyday as a "joyous and occasionally wild place" from the mid 19th century to the Second World War.

During his talk it was revealed that the author had been born at the Elephant & Castle and his grandmother, who knew all the music hall songs, lived close to New Kent Road.

Leigh Hatts writes: Stephen Humphrey's 128-page story of the Elephant & Castle can be described as the long-awaited definitive history. He explodes myths with an in-depth account of the origins of the Elephant and Castle sign which hung outside the road junction's inn from, he believes, the mid 1750s.

He produces proof that the name is not, as often claimed, a corruption of 'Infanta de Castilla'.

Among the illustrations is the first written record of the name 'Elephant and Castle' in the Walworth Manor court leet minutes dated 21 March 1765.

The book also shows Thomas Rowlandson's drawing of the road junction where he depicts what may be the original pub sign.

A 1746 map and an annotated 1914 map enable the reader to understand the changing area and the location of churches, inns and theatres described in the text.

This thorough book should be essential reading for all who are now engaged in the latest reshaping of the famous junction.

• Elephant & Castle: A History by Stephen Humphrey is published by Amberley (£14.99).

• The church of St Matthew-at-the-Elephant, featured in the book, is marking the 20th anniversary of its present building with a service at 11am on Sunday 8 December when the preacher will be the Dean of Wakefield Cathedral. The Deputy Mayor of Southwark will also be in attendance.