A website devoted to the history of Nelson Square has been launched by its residents. 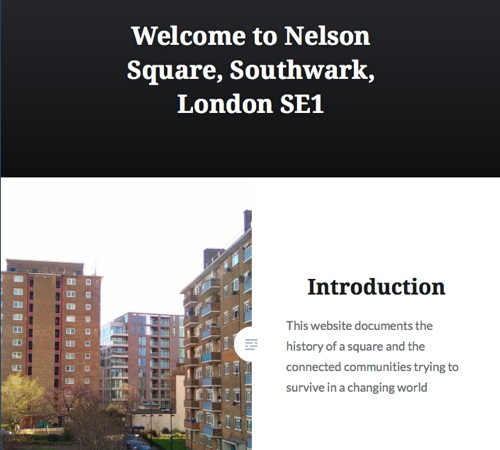 The Nelson Square Gardens Community Association has begun what is intended as a long running project to bring together everything known about the square off Blackfriars Road.

The site went live last Wednesday evening when it was revealed on a large screen to a gathering of residents and guests in the estate's community room.

Those present included historian Stephen Humphrey who gave an overview of the national heritage found in the Bankside and Blackfriars Road district.

The Nelson Square website includes a timeline showing that the square was laid out between 1807 and 1814. One of the first tenants was the young poet Percy B Shelley.

Blackfriars Settlement arrived in 1891. At the end of that century the freehold of the land passed from Lord Halifax to the council.

Special sections on the website are devoted to the Dog and Pot which has returned to the Union Street corner, the Surrey Chapel on the Palestra site across the road and the Second World War when bombing led to the rebuilding of the four sides as flats.

Only a few of the original Georgian houses survive in the south-east corner.

In introducing the project long term resident Maxine Walker spoke of the area having always had a mixed population. But she expressed strong fears that it might soon cease to be mixed with one flat already commanding an annual rent of Ł28,000.

The website has an introduction which also looks at the future of the wider area: "So we ask, where are people going to live in London? People staffing the essential services, older people, people with disabilities, low waged people? And the answer, given loud and clear to the Heygate estate residents decanted, many forced to leave London was… who cares?

"It sounds disastrous and it is disastrous. Working people are being driven out of London."

Juha Repo gave a commentary as pages were revealed and explained how pictures and information had been obtained. The residents' association is not only appealing for more material and memories but hoping to encourage other estates and streets to create heritage websites before further change takes place.