Garden Bridge: public sector to meet 40 per cent of cost

The Mayor of London is to provide match funding for the Government's £30 million contribution to the construction of a tree-lined pedestrian bridge between the South Bank and Victoria Embankment. 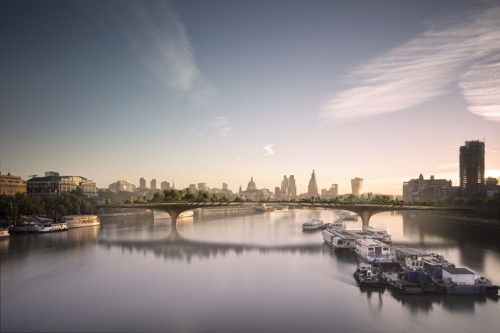 The bridge – devised by Joanna Lumley and designed by Thomas Heatherwick with landscaping by Dan Pearson – will cost around £150 million to build.

This week it became clear that around 40 per cent of this total – £60 million – is likely to come from the public purse.

Confirmation that the total public sector support for the capital cost of the bridge is in fact twice the £30 million announced by central Government last December came on Monday in a parliamentary answer from Danny Alexander MP, chief secretary to the Treasury.

Responding to questions tabled by Labour's shadow transport secretary Mary Creagh MP, Mr Alexander said: "The Government have committed to provide £30 million towards the cost of the Garden Bridge.

"This is conditional on a business case demonstrating that the project represents good value for money.

"Transport for London will match this £30 million contribution."

A spokeswoman for the Garden Bridge Trust, the charity set up to fund and build the scheme, confirmed that the Mayor of London – who chairs TfL – had agreed to match the Government's payment.

TfL – which has not made any official announcement about the proposed funding – also confirmed the accuracy of Mr Alexander's statement to Parliament.

When the proposals for the bridge were published last summer, Transport for London's Michele Dix said that "the construction of the structure is entirely dependent on third party funding".

In September – after the Mayor had authorised TfL to spend up to £4 million on the project – transport commissioner Sir Peter Hendy claimed that "our contribution is limited to enabling costs associated with securing the necessary consents and approvals".

Speaking at the London School of Economics last month, Boris Johnson called the Garden Bridge "the most beautiful revolution in public realm since the 8th century".

He went on to describe "...a bridge with no purpose other than to recreate the soul – with bosquey nooks and bowery corners such as Kubla Khan might have called into being in Xanadu – where the students of LSE will be able to go off for crafty fags and romantic assignations, to read your Schumpeter or Marx (or whatever floats your boat) as the sun goes down on the Thames".

The Mayor also confirmed that cycling will be prohibited on the bridge which will be "strictly for meditation and contemplation".

Although Mr Johnson praised Danny Alexander for "wielding his gigantic chequebook in favour of the Garden Bridge" he made no reference to his own proposed match funding.

Earlier this month the Garden Bridge was described in the House of Lords as "a vanity project of the Mayor".

"But if the Mayor is to now spend at least £30 million of London taxpayers' money on this project he should at least ensure that it operates like a proper bridge.

"At the very least cyclists should be able to use it as a safe route across the Thames."

"It would be appalling if so much public money was spent on a new Thames crossing which totally excluded cyclists."