Elephant Angels has celebrated the opening of its second office. The community advocacy service was launched in late 2001, and has proven so successful that more space was urgently needed. 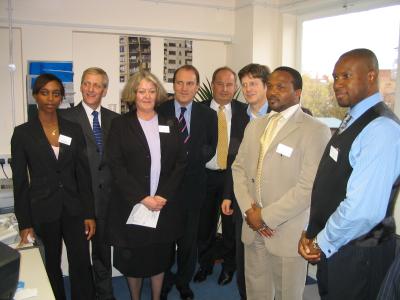 Fortunately, Elephant Angels managed to secure 2800 square feet just up the walkway from the original office, at the heart of the Heygate Estate in Elephant and Castle.

Simon Hughes MP, Liberal Democrat Mayoral Candidate, praises Elephant Angels for "helping people help themselves". Mr. Hughes points out that "London, the sustainable city" will only exist if the villages that make up London are sustainable. And sustainability depends on people helping each other, with "the people who are on the 'up-escalator' – through good fortune or hard work – reaching out to those who didn't get on or can't stay on". As Mr. Hughes emphasizes: "We're a village, and we're all in it together."

Elephant Angels provides advocacy services to those more likely to find themselves on the 'down-escalator'. 'Advocacy' as practiced by Elephant Angels is as varied as the people who walk through its door. One client might come in looking for a job; another for advice on disability benefits; a third for someone to decipher their mail because they cannot read English.

"People tend to come here with more than one problem," says Salil Banerjee, an advocate with Elephant Angels. "For example, they'll be looking for work, but have just got served an eviction notice. Sure, they need a job, but first they need to take care of their housing."

The great advantage of Elephant Angels is that its nine advocates can offer help on a whole range of issues to all kinds of people. There are two teams – one focusing on employment, education, and training, the other on 'community' issues including housing, debt, and asylum. A client with a variety of problems can speak with several different advocates on-site, rather than being shunted from one organization to another dealing only in one specific issue (e.g. employment) or with one specific client-base (e.g. the elderly).

While some clients have their questions answered in just one session with Elephant Angels, most face problems that don't have a quick fix. Ray Auvray, Group Chief Executive of Prospects, the organization that secured the funding for Elephant Angels, points out "these days we want a quick fix for everything… but there just isn't one for so much of the work we do".

The advocates provide information, offer advice, and help with the practicalities of making a phone-call or filling out an application. "People don't fail to get jobs because they can't do the work," observes James Tompsett, an advocate on the Learning and Employment team. "They don't get a job because they don't have the confidence to fill out the application form."

An advocate might even accompany a client to a medical appointment, or a job interview. Evan Hamilton, a long-term client of Elephant Angels, recounts how his advocate, Dave, came along with him to the Blackfriars Settlement Literacy Programme to help him register. Evan, now in his sixties, grew up in old-school orphanages, and never learned to read or write because nobody had had the patience to deal with his dyslexia. Evan is proud to say he is now "learning every day" – reading, writing, and working on the computer – and swears that he wouldn't be doing any of it if it weren't for Dave.

Elephant Angels doesn't offer substantive services itself. Rather, it makes people aware of' and helps them take advantage of, existing services. The people that advocates try hardest to reach out to are precisely those who are 'hard-to-reach'- the homeless and the housebound, for example, as well as people with mental health problems or substance addictions, ethnic minorities and asylum seekers.

Evan Hamilton, a case in point, says that before he stumbled across Elephant Angels, all he did was "watch the box and stroll around the street". By planting itself right on the doorstep of the people it is trying to help, Elephant Angels has upped the ante against ignorance, apathy and despair.

"One of the greatest challenges we face is breaking a mindset," comments advocate James Tompsett. "Some people feel that because of where they're from, their history, the prejudice they've encountered, it's not worth looking for work since they won't get a job anyway."

Advocate Salil Banerjee adds that at Elephant Angels, "We deal with the long-term unemployed, who lack confidence and have no individual or material resources. Here, we have to help build them up to face the outside world."

Mr. van Dyke is currently preoccupied with securing alternative sources of funding for Elephant Angels. At the moment, the programme is being run on a GBP 4 million allocation from the government's Single Regeneration Budget (SRB), which runs out in 2006. "We need to bring in additional funds to build capacity and sustainability, so that there will be a future for advocacy beyond the SRB' says Mr. van Dyke.

• To learn more about Elephant Angels, or to make an appointment, visit one of the two offices on the Heygate Estate. Both are officially on Brandon Street (the original drop-in center is at 17, the new office is on the top level in 'The Surgery' at 27-29), but both face Rodney Road and are more obviously accessed from the walkway at the corner of Rodney Road and Content Street.