Key organisations and individuals who have contributed to the Elephant Links Regeneration Partnership were recognised at an awards ceremony to mark the end of the Single Regeneration Budget funding. 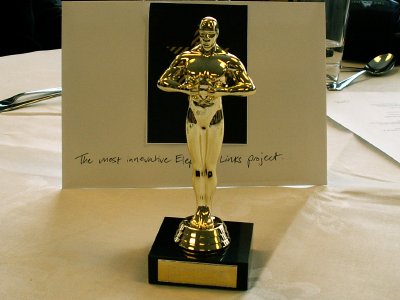 Representatives of local organisations gathered at London South Bank University on Wednesday for the awards ceremony, just days before the final year of full-funding ends on 31 March.

Four main awards were presented at the ceremony. The award for overall impact on the Elephant community was presented to Kick Start, which engages at-risk children of all nationalities in activities and support programmes. The programme has over 550 children actively involved in football, arts and media and is expanding to include youth consultation and involvement initiatives. Other shortlisted projects were Southwark Credit Union, Elephant Impacts and the Elephant community wardens.

fones4safety won the innovation category, with nominations for Solar Schools (which has installed solar panels in five local schools), Community Logistics, Elephant Angels, Into, Community Kitchens and an initiative to set up parents' rooms in local schools.

A third award category was for sustainability – the judges considered which projects were likely to be flourishing in five years' time. Southwark Credit Union was the winner, with shortlisted projects including Business Extra.

The fourth award was for individual achievement – a person who has made a significant difference to the Elephant and Castle community. Richard Anderson of Elephant Jobs was the winner in this category. Local personalities on the shortlist included Tim van Dyke of Elephant Angels, Emma Winkley of Southwark Credit Union, Sarah Potter from the small grants scheme and local resident Janet Yatak.

A special award was presented to three local residents who had participated in the Elephant Links partnership: Helen O'Brien, Doreen Gee and Abdul Kadir.

Elephant Links was established in 1999 in response to a central government invitation to establish a partnership to create social and economic change in the Elephant and Castle, ahead of the Ł1.5 billion physical redevelopment of the area.

The partnership has has brought together a diverse range of interests including Southwark Council, residents, voluntary sector groups, education providers, statutory agencies and employers.

The end of the Elephant Links funding for social and economic projects comes just as the first manifestations of the physical regeneration begin to appear; some of the Elephant's subways will be removed this summer and Southwark Council has just granted planning permission for two major developments which are due to begin before the end of 2006.