Southwark Circle, a local social network for over-50s which received a £1 million startup grant from Southwark Council, is to close at the end of the month. 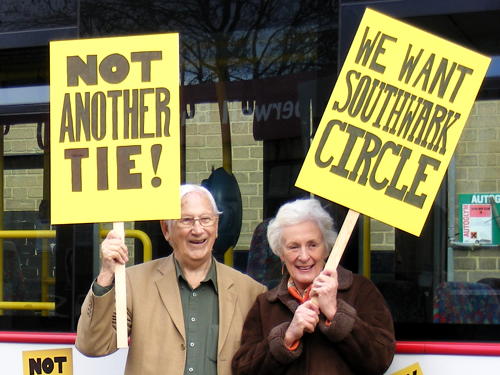 The launch of a Southwark Circle advertising campaign in 2009

Southwark Circle was a social enterprise set up by the Tanner Street-based Participle organisation. Founded in 2009, it received a £1 million grant from Southwark Council over three years.

The network was designed to encourage older people to help each other with practical tasks and social activities rather than relying on public services.

In time more 'circles' were established in Hammersmith & Fulham and elsewhere in the capital and a London Circle community interest company (CIC) was set up to co-ordinate activities.

London Circle, in a statement on the Circles Central website, said: "Sadly however the current climate of deep cuts in the public sector has made it increasingly difficult to support the growth of London Circle.

"Circles receive no core funding and whilst we generate revenue from our members, a climate of deep recession and our commitment to serve the whole community meant that London Circle could not be independently sustainable at this time.

"London Circle CIC therefore made the sad decision to cease trading from the end of March 2014. All financial commitments were met: no London Circle members were left out of pocket and any outstanding membership fees were refunded."

Before he became prime minister David Cameron praised Southwark Circle in a speech to the Conservative Party's spring conference in 2009.

Circles in Rochdale and Nottingham are unaffected by the closure of the London network.