Members of Southwark Circle, a membership organisation for the over 50s, were in Borough Market on Red Nose Day painting shoppers' nails red in return for a £3 donation to Comic Relief. 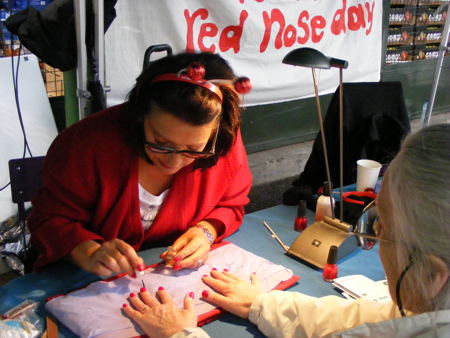 Southwark Circle is a social enterprise set up by the Tanner Street-based Participle organisation. It is receiving a Ł1 million grant from Southwark Council over three years.

Southwark Circle's members are primarily residents of Southwark over 50 years of age.

Retired beautician Pamela Stack was one of the members putting their skills to use on Friday.

Members of Southwark Circle are used to 'painting the town red', as every month they have access to a packed social calendar.

Over the next couple of weeks they will be going out for an Italian meal, seeing Billy Elliot in the West End, watching the Boat Race by the river and going backstage at the Young Vic for a private tour and drama workshop.

Pauline Brady, a new member of Southwark Circle, said: "I have never been so busy; I've had to start keeping a diary again just to make sure I fit it all in."

The initiative, which encourages older people to help each other rather than relying on public services, has been praised by prime minister David Cameron and health secretary Andrew Lansley.

The Circle Movement, which started in Southwark, is now being launched in other areas including Suffolk and Hammersmith & Fulham.