Work is under way at Waterloo Station to construct a new link between the mainline concourse and the disused international terminal. 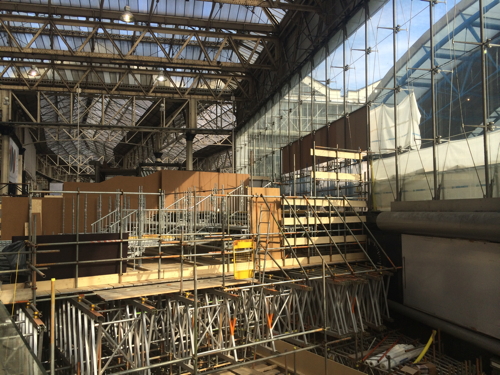 The former Eurostar platforms are separated from the domestic station concourse by a sunken area known as the 'orchestra pit'.

In Marchr South West Trains and Network Rail revealed that they plan to make use of platforms 21 and 22 for commuter train services by the end of the year and now work is under way to build a new deck across the former Eurostar concourse to enable easy access between the two parts of the station.

A number of kiosks and cash machines have been removed from the concourse to make way for the new bridge.

One former Eurostar platform – number 20, which adjoins the domestic station and doesn't need separate access – is already in use by South West Trains.

The five platforms under Nicholas Grimshaw's glass roof have been largely disused since Eurostar relocated its London terminal to St Pancras in 2007.