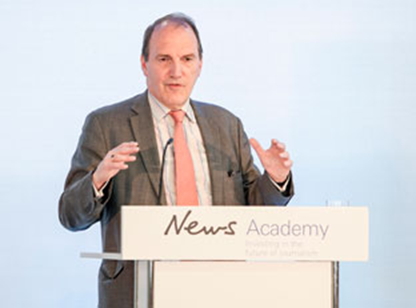 The News Academy conference for London secondary school pupils was hosted by News UK at its Wapping headquarters as it prepares to relocate to The News Building at London Bridge.

Simon Hughes will be News UK's MP when the company moves south of the river and he welcomed the company's commitment to providing training and opportunities for those seeking a career in journalism.

"Members of Parliament have been elected in Southwark since 1295.

"The activities of all the MPs before me will have been reported in many different ways.

"But I doubt that ever before were there as many people and different forms of media reporting on Southwark's elected representatives.

"The good thing is that journalism and the media are now available to more people than ever before.

The MP added: "Many of the best journalists benefit from learning their skills from those who have learnt before, so I welcome the initiative of a News Academy coming to London Bridge later this year, to join the London College of Communication based at the Elephant & Castle, which will give additional opportunities to the journalists of today and tomorrow to learn their trade, whether it is to report on barge races on the Thames or civil war in the Middle East."

Pupils from Globe Academy were among those from state and private schools across the capital represented at last month's conference.

Speakers included Times editor John Witherow and colleagues from The Sunday Times and The Sun.

15-year-old Nawel Seksaf from Harris Academy Bermondsey said: "We all write about the subjects that we're most curious about every week for own journalism blog, Scribes of Southwark, every week.

"As a group, we have a range of really different interests, like feminism, local issues or politics."

• Find out more about the News Academy initiative at www.news.co.uk/academy