20 mph limit introduced on two and a half Thames bridges

The speed limit for motor traffic on Blackfriars Bridge and London Bridge has been cut from 30 mph to 20 mph. The northern half of Southwark Bridge is also covered by the new limit. 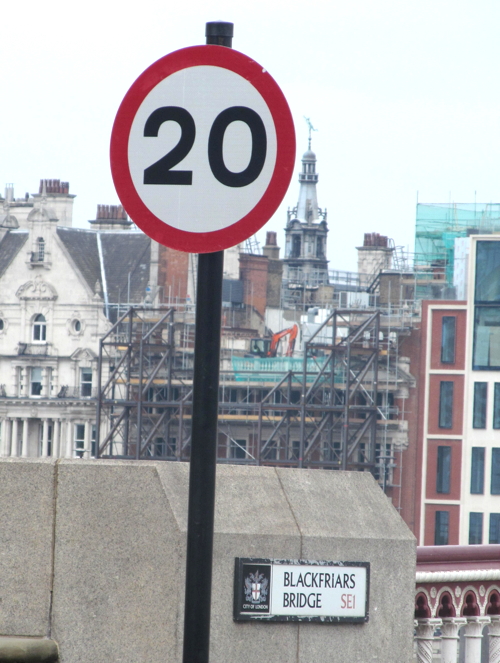 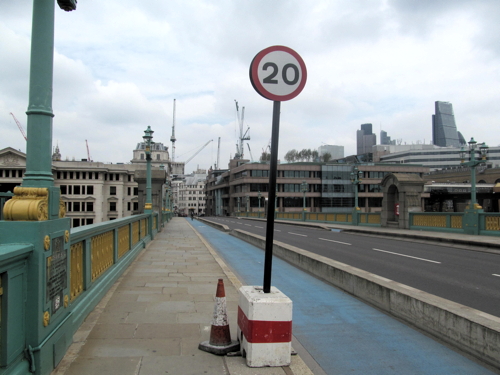 For the time being the speed limit changes from 30 mph to 20 mph in the middle of Southwark Bridge. The whole bridge will eventually become part of a 20 mph zone.

Transport for London has introduced the experimental new speed limit on Blackfriars Bridge and London Bridge to coincide with the City of London's introduction of a 20 mph limit on nearly every road in the Square Mile.

Southwark Bridge doesn't fall under TfL's jurisdiction so the speed limit changes from 20 mph to 30 mph in the centre of the bridge where the Square Mile meets Southwark.

Southwark Council this week approved plans to make all the roads it manages in the borough – including the southern half of Southwark Bridge – a 20 mph zone despite objections from the police.

In the Square Mile the City of London Police have taken a more positive attitude than their Metropolitan Police counterparts.

City Police Superintendent Norma Collicott said: "The introduction of the 20 mph speed limit, coupled with continued education and enforcement activities and the other initiatives included in the City of London Corporation's road danger reduction plan, is to be welcomed."

Mayor of London Boris Johnson said recently: "I can confirm that TfL is currently investigating whether 20 mph would be an appropriate speed limit for the Elephant & Castle northern roundabout, southern junction and nearby feeder roads.

"The assessment includes a review of the impacts on all road users including bus operation and the potential for measurable safety improvement impacts."