Cyclists commuting into central London via Kennington Road on Wednesday were given free fluorescent armbands by the Guide Dogs charity as part of an initiative to encourage better relations between cyclists and blind and partially sighted Londoners. 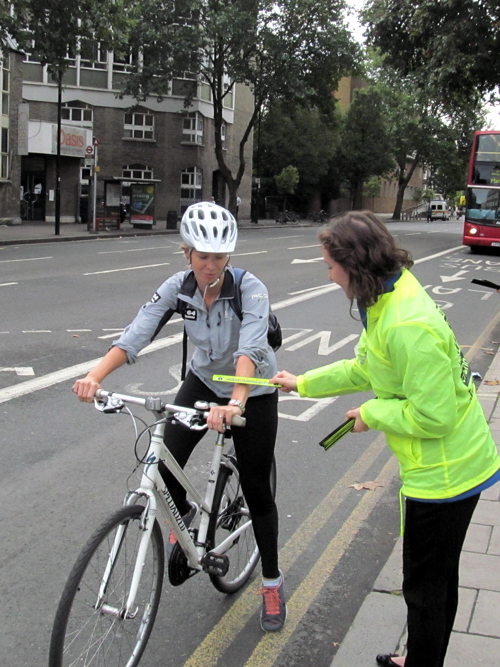 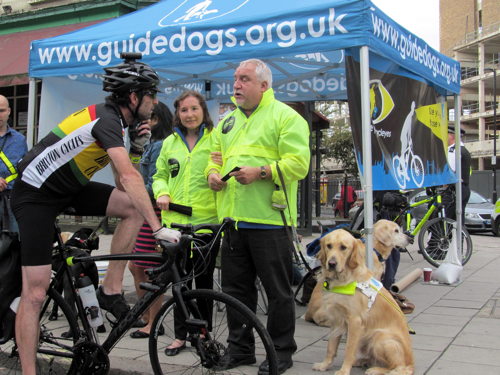 A guide dog owner chats to a cyclist in Kennington Road

The campaign has the backing of Transport for London and the London Cycling Campaign, and Wednesday's event was also attended by the Metropolitan Police's safer transport command.

The Guide Dogs charity recently carried out a survey of guide dog owners in London which found that one in four blind and partially sighted respondents have been involved in a collision, and seven out of ten vision impaired people have experienced a near miss when cyclists either ride on pavements or skip red lights at pedestrian crossings.

"We work incredibly hard to get blind or partially sighted people out of their homes and mobile, so to hear that vision impaired people are anxious and in some cases fearful about going out in London because of irresponsible cyclists is very worrying," said Rob Harris, Guide Dogs London engagement manager.

"With the Mayor committing £913 million to a 'cycling revolution' we need to make sure that cyclists are more aware of blind and partially sighted pedestrians and use their eyes for those who can't."

Guide dog owner Deborah Persaud from Islington said: "I was walking home from the tube station with my guide dog. I was halfway along the road when I was struck by a cyclist coming towards me on the pavement. My dress was torn, the contents of my handbag damaged and I was left with damage to my shoulder and hip. I'm hoping this campaign will stop such incidents happening to me again."

Rob added: "The vast majority of cyclists in London are responsible, but I think most Londoners with sight can quite easily remember the last time they saw a cyclist skip a red light or cycle on the pavement.

"It's that behaviour that can lead to accidents, and that is why we want to change, with the help of all responsible cyclists. We hope this awareness campaign will help towards that."

Leon Daniels, TfL's managing director for surface transport, said: "It is vital on London's busy road network that we all understand and respect the needs and welfare of our fellow road users.

"We support the Guide Dogs' campaign to remind cyclists and other road users to watch out for and give extra care to visually impaired and other vulnerable pedestrians. This, together with the work being done to make pedestrian crossings more accessible with tactile paving and audible signals, will make London's roads safer for all."

Charlie Lloyd, campaigns officer for the London Cycling Campaign, said: "People riding bikes in London have a duty of care to look out for every other road user. Any crash or a close pass which frightens or intimidates a pedestrian is unacceptable. Far worse when that person is blind, partially sighted or in any way less able than we are."