An experimental 'mini zebra crossing' will be installed on the cycle superhighway in Blackfriars Road this summer, Mayor of London Sadiq Khan has said. 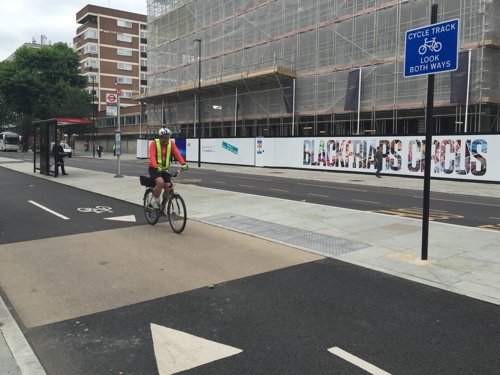 News of the trial came in the mayor's response to a question tabled by Liberal Democrat London Assembly member Caroline Pidgeon.

She asked the Mayor: "Are you satisfied with the level of consultation TfL is undertaking with pensioner groups and disabled people over the creation of cycle routes that bypass bus stops?

"Will you consider a moratorium on them being created until safety concerns raised by many bus users and pedestrians are adequately addressed?"

Mr Khan replied: "I am conscious of the concerns raised by older and disabled people about bus stop bypasses and I will ensure TfL fully addresses them.

"The group has developed a trial of mini zebra crossings.

"The trial will consist of video monitoring and shadowing vulnerable road users as they use the trial infrastructure.

"The group will determine whether mini zebra crossings give older and disabled people more confidence using bus stop bypasses, and if this infrastructure should be installed at particular stops to enhance the current design."

Earlier this week a protest was held in Westminster Bridge Road against TfL's plans for a 'floating' bus stop outside outside St Thomas' Hospital.