A Cathedrals ward councillor is offering advice to London's Latin American community as part of a new project hosted by the Ecuadorian Consulate. 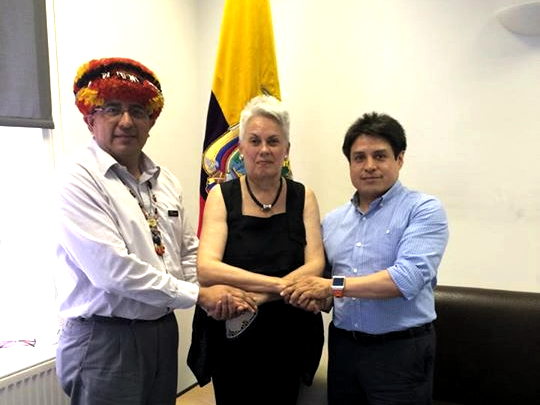 Liberal Democrat councillor Cllr Maria Linforth-Hall, who was born in Ecuador but moved to London over 40 years ago, will be on hand each month to advise on how to deal with problems like housing, health and immigration.

The first advice session has already been held, with Cllr Linforth-Hall welcomed to the consulate by the Consul of Ecuador, Captain Juan Arcos Tuitza.

Cllr Linforth-Hall pledged to run a Latin American surgery before she was elected in May, after receiving dozens of letters and emails from South Americans who didn't know who else to turn to. She asked the Ecuadorian consulate if they could provide a venue, which they agreed.

Cllr Linforth-Hall now aims to use the sessions to point people in the right direction for help on a whole range of issues affecting London's Latin American community.

The advice surgeries will take place at the consulate's office on King's Cross Road at 3pm on the second Saturday of every month. Anybody needing help can just turn up on the day.

"On top of the issues I deal with as a ward councillor, I regularly get Latin Americans from all over the UK asking for help with a huge range of issues," said Cllr Linforth-Hall.

"For minor issues, I try to advise people on how to get their problems sorted out straight away. For bigger issues it's a case of signposting people towards the right kind of help or telling them to get in touch with their own council or MP.

"Immigrant communities don't always know how the system works, so it can often be a case of just telling them the processes they need to go through."

"I am grateful to the Ecuadorian consulate for hosting these sessions, which I hope will be a long-term arrangement. My local MP Simon Hughes has been hugely supportive to the Latin American community and I have already been working with him on some of the cases brought to me from his constituency."