Contractors started to dig exploratory boreholes in the River Thames for the controversial Garden Bridge this week, just days after a High Court judge ruled that the scope of a judicial review of the decision to approve the scheme could be widened. 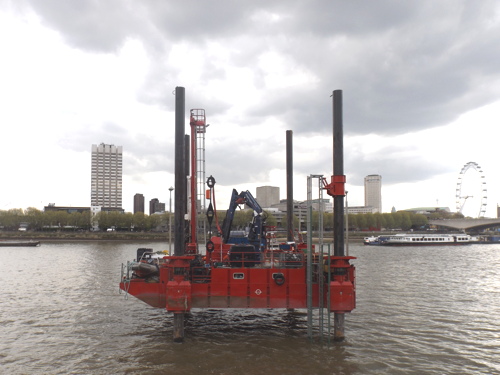 The jack-up barge Skate 2D will be used to dig 4 deep boreholes, 16 shallow boreholes and 30 shallow cone penetration test boreholes. Engineers will work round the clock for five days to complete the survey.

Last Tuesday opponents of the Garden Bridge successfully argued in the High Court that the forthcoming judicial review proceedings into the bridge's impact on London's heritage should also examine whether Lambeth Council properly examined the financial arrangements for the structure's upkeep before granting approval.

Mr Ball claimed that in granting planning permission Lambeth Council had not properly considered the impact of the bridge on world-famous views in central London.

Last month the High Court ruled that questions about funding for the long-term maintenance of the bridge were academic since Mayor of London Boris Johnson had promised to guarantee these costs.

But last week Mr Justice Ouseley ruled that there was also an arguable case that Lambeth had failed to properly consider long-term maintenance funding.

David Forsdick QC, acting for Mr Ball, drew the court's attention to remarks by Mr Johnson at Mayor's Question Time in March when he said that it would be "totally ludicrous" for the public sector to fund the bridge's maintenance and that his pledge was a "temporary undertaking" intended "to get the planning process moving along".

The Mayor had also pledged not to release Transport for London's £30 million capital funding contribution for the bridge until he had received a counter-guarantee that his promise to underwrite the maintenance would not be called on.

In a statement released after last Tuesday's High Court hearing, the Garden Bridge Trust said: "The Garden Bridge is a world first that will benefit the quality of life, health and wellbeing of both local communities and visitors alike.

"We are continuing to meet with and work with stakeholders and local communities with the intention to begin on site early next year.

"More than £125 million has been pledged to date for the £175 million needed to build the bridge.

"This is principally with donations from individuals, charitable foundations and companies, including one in February which has gone exclusively towards the purchase of 240 tonnes of copper-nickel alloy.

"This will make up a protective skin on the surface of the bridge – making it maintenance free for 120 years.

"We have a clear business plan in place to fund the construction of the Bridge and the estimated £3.5 million per annum needed for ongoing maintenance and operations.

"We will use a mixed model approach to secure the funds including individual and corporate membership programmes, a small number of sponsorship opportunities and events, as well as some carefully selected commercial opportunities.​

"The Garden Bridge will be a new, free public garden in the very heart of urbanised London and will benefit the quality of life, health and wellbeing of both local communities and visitors alike."

However – even supporters of the bridge are critical of the high maintenance costs. Boris Johnson admitted last month that the £3.5 million figure was "absurdly high" and had been "plucked out of the air".

The full judicial review is scheduled to be heard in the High Court in June and is expected to last two days.

Mr Ball is running a crowdfunding appeal at www.everyclick.com/tcos to raise financial backing for the judicial review. So far £10,000 has been pledged.

The Mayor of London has also revealed that the City Bridge Trust, the historic City of London Corporation charity which owns five Thames bridges between Tower Bridge and Blackfriars Bridge, could play a role in the Garden Bridge project.

Coin Street Community Builders – who manage the riverside walkway at the southern end of the proposed bridge – recently published a statement on their website about their position on the scheme.