The Archbishop of Canterbury's official residence has been granted a licence to sell alcohol and play amplified music in the gardens, despite a 49-signature petition by nearby residents. 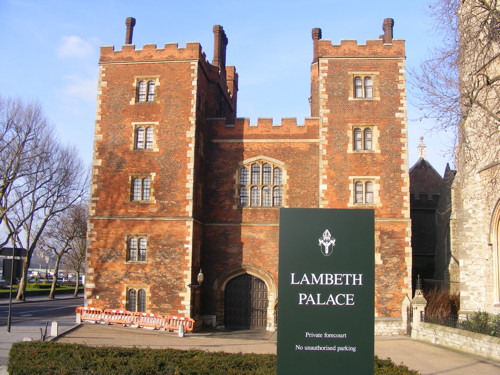 A Lambeth Council licensing sub-committee approved the licence at a meeting last week.

The licence application was submitted by Palace Public Occasions Ltd, a company registered at Church House in Westminster and whose directors include the archbishop's chief of staff Kay Brock.

Louise Donovan, head of events at Lambeth Palace, explained that at present they are unable to run a pay bar at events in the palace and its grounds. "As a revenue generator, we would like to start charging for alcohol," she said.

Ms Donovan explained that the palace already hosts many receptions each year: "80 per cent of the events we have are for charities," she said.

"10 per cent is for corporate clients. We would like to build on that to 20 per cent if possible."

Ms Donovan said that the palace had picked a catering firm that works with the Tower of London and the Victoria & Albert Museum as its partner for corporate events.

49 people signed a petition objecting to the provision in the licence application for live and recorded music in the palace garden until 11pm.

"There's been quite a strong feeling locally about the licence being given," Cllr Jennifer Mosley told the sub-committee.

Cllr Mosley and Cllr Ben Kind explained that local residents were concerned about the prospect of loud music from the palace gardens being heard in the adjacent public park (Archbishop's Park).

Ms Donovan insisted that rowdy behaviour would not be tolerated.

"We will certainly not be letting anyone in the door who would bring the Archbishop's name into disrepute," she said.

"The last thing we want to do is to upset the community."

The three sub-committee members resolved unanimously to grant the licence but with the provision that all live and recorded music must cease by 9pm.

The current archbishop, Justin Welby, has pledged to make his official residence at Lambeth Palace "a symbol of service and love" in contrast to its traditional role as a bastion of "power and authority".

This year he introduced extended public access to the gardens.