Lambeth libraries staff have voted overwhelmingly for strike action to save jobs and keep all 10 libraries in the borough open. 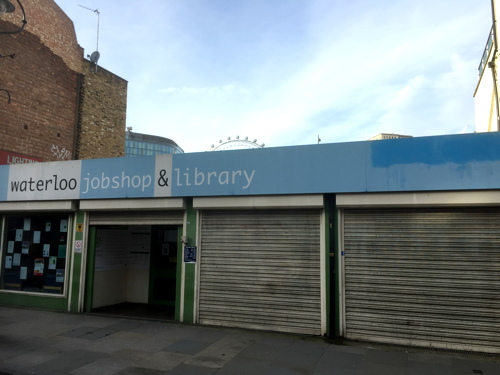 Waterloo Library is due to close in a matter of weeks

The strike ballot by members of Lambeth Unison comes as Waterloo Library in Lower Marsh faces closure in the next three months.

89 per cent of library staff who took part in the ballot voted to strike against plans to close libraries and cut jobs.

Unison says it will now be discussing extended strike action with the library workers in the borough.

This strike vote follows a significant community campaign to keep the libraries open as well as an impromptu walk-out by staff in November.

"This vote shows the commitment library staff have to defending the services we provide to our communities," said Ruth Cashman from Lambeth Unison.

"We know that libraries can change lives, we know this is nothing short of cultural vandalism and we won't stand by while our library network is dismantled."

Cllr Jane Edbrooke, cabinet member for Neighbourhoods, said: "I understand the frustrations of those working at our libraries, but this potential industrial action is unhelpful.

"We have worked with community groups and organisations and been imaginative in our proposals that keep the majority of our libraries open – while helping make us make the £200 million in savings needed in response to Government budget cuts.

"There may be job losses among library staff, and at least two of our 10 libraries will be run as healthy living centres, creating income to keep them open alongside a neighbourhood library service in the buildings.

"I know these changes are difficult, I know no one wants to see services revised – but this is the reality we face with our budget under severe pressure."

Last month Oasis founder Steve Chalke addressed local residents at the South Bank Forum to set out plans for the temporary library in Waterloo to be provided at the Oasis Centre once the council-run service is closed.

Do you support Lambeth library staff in their strike action?