Waterloo Library - and every other Lambeth library - was shut on Wednesday after staff staged a 24-hour walkout over plans for massive cuts to the service. 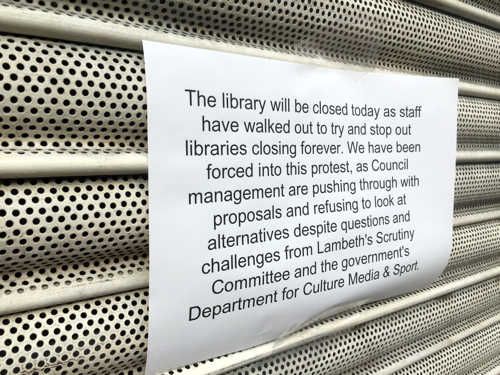 Notice on the shutter of Waterloo Library on Wednesday

"I understand the frustrations of those working at our libraries, but this unofficial industrial action is unhelpful and counter-productive," said Cllr Jane Edbrooke, cabinet member for neighbourhoods.

"The fact is Lambeth Council has come up with proposals that keep the majority of our libraries open – while helping make us make the £200 million in savings needed in response to Government budget cuts.

"Regarding the future of our libraries we have listened to residents, worked with the community groups and been creative in how we keep services open to the public.

"Yes there will be job losses among library staff, and yes at least two of our 10 libraries will be run as healthy living centres, creating income to keep them open alongside a neighbourhood library service in the buildings.

"I know these changes are difficult, I know no one want to see services revised – but that is the reality we now face."

The Lower Marsh library is due to close permanently by next April under the 'Culture 2020' plan to restructure the library service and cut one in four staff.

Last week Lambeth's overview & scrutiny committee voted 5-4 not to refer the 'Culture 2020' report back to cabinet after the decision was called-in by Tory leader Tim Briggs and Green councillor Scott Ainslie.

Dozens of campaigners packed in to Lilian Baylis Technology School for the scrutiny hearing. The final 5-4 vote was greeted with chants of 'shame on you' from the public gallery.

A spokeswoman for the Friends of Lambeth Libraries said: "Surely we can work with this and easily show how awful and financially unnecessary these daft plans are.

"It is glaringly obvious to anyone prepared to listen. The council can do itself a favour and re-think.

"Or it can face furious opposition from residents all over the borough, who are marching in their hundreds and signing petitions in their thousands."

A further protest is planned at Wednesday night's council meeting.

A temporary library for Waterloo is due to open next year at the Oasis Centre in Kennington Road but it is not clear how or whether this new library will be staffed.