After Lambeth councillors criticised the design of the proposed South Bank landing building for the Garden Bridge, Heatherwick Studio has tweaked the colour scheme to use 'quartz grey' instead of 'brown grey'. 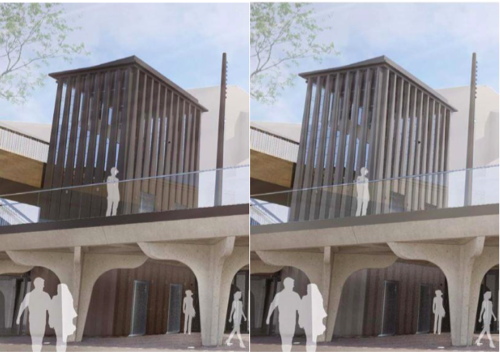 Earlier this month Lambeth's planning applications committee asked the Garden Bridge Trust to reconsider the materials for the building and lift shaft to be constructed on the South Bank as part of the controversial new river crossing.

Councillors criticised the design of the proposed building, describing it as "bleak", "overbearing" and giving a "stay away from here" message to would-be visitors.

The planning applications committee will be asked to approve revised plans at their meeting on Tuesday 8 March.

According to papers published today by Lambeth Council, Heatherwick Studio has responded to the councillors' comments by changing the colour of the metal elements of the proposed South Bank building from 'brown grey' to 'quartz grey'.

In their report to the committee, Lambeth planning officers conclude that the change of colour "lends the building a more temperate appearance".

At their February meeting councillors also asked for a rethink of the proposed public toilets at the Garden Bridge.

Eight unisex cubicles had been included in the plans, but committee members asked for separate male and female facilities to be provided.

Under the revised plans, the Garden Bridge Trust is now proposing four cubicles in the ladies' toilets, with the gents' toilets having three urinals and one cubicle. A unisex accessible toilet will be provided.

Lambeth planners claim that the proposed toilet provision is well in excess of the British standard for public conveniences, and would have capacity to meet the toilet requirements for up to 9,600 people per hour.

At its busiest, 5,000 people an hour are expected to cross the Garden Bridge.

• A decision will be made by Lambeth's planning applications committee on Tuesday 8 March, 7pm at the Karibu Centre in Brixton.

What do you think of the latest proposals?