Peabody and Ministry of Sound fall out over Borough Triangle

Plans by Peabody to build homes and new premises for the Ministry of Sound nightclub have collapsed in an acrimonious dispute between the two parties. 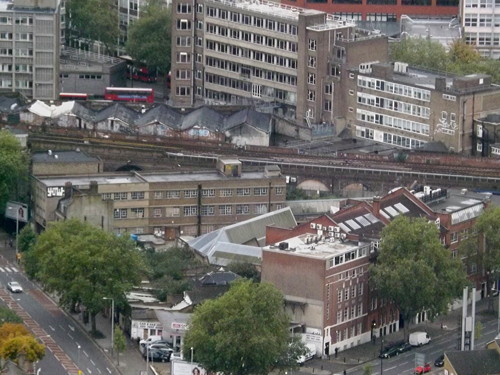 Two years ago housing association Peabody acquired the site bounded by Newington Causeway, Borough Road and the railway line – then known as the Newington Triangle – from Hollybrook Homes whose own development plans had stalled.

Peabody dubbed the site the 'Borough Triangle' and proposed a development of more than 500 mostly private homes, as well as a new headquarters building for itself.

The proposal included purpose-built subterranean premises for Ministry of Sound to replace its current home in a former bus garage on the other side of the railway viaduct.

The Institute of Optometry and the London School of Musical Theatre were also to have been incorporated in the scheme.

Peabody has now written to Southwark Council to withdraw its planning application for the Borough Triangle while it works up new proposals for the site without the Ministry of Sound.

In March Ministry of Sound's lawyer – Tim Taylor of Foot Anstey – wrote a strongly worded letter to Southwark planners blasting Peabody's decision to ditch the nightclub from its proposed development.

"The reason given by Peabody was, in Ministry of Sound's opinion, pathetic – something to do with acoustic results," wrote Mr Taylor.

"In Ministry of Sound's opinion, the real reason why the collaboration has failed is that despite Ministry of Sound's enormous outlay, both financially (over £1.6 million in professional costs to date) and in immeasurable amounts of management time, Peabody has shown itself to be incompetent and incapable of delivering a project of this size and complexity."

Mr Taylor went on to warn that the nightclub will object to any Peabody development plans for the site "in the strongest possible terms" on the grounds that new residents moving in to homes adjacent to the existing club premises could put the venue's licence at risk of review.

The nightclub says its focus "will be on securing its long-term future at its current location".

In turn, Dale Meredith of Peabody wrote to Southwark Council's planning department with a rebuttal of the nightclub's claims.

He wrote: "It is disappointing that Ministry of Sound made a number of allegations in their letter to you, which are not true and we do not accept.

"It is important to us that you, along with other stakeholders – including immediate neighbours, the wider community, planning authorities, our regeneration partners, Peabody residents and Ministry of Sound's customers and supporters – have a clear and accurate picture of our position.

"Peabody is a charity and our core purpose is to provide much-needed housing for London. Technical constraints and changes in our operating environment have, regrettably, combined and it is no longer viable, prudent or fitting for Peabody to include Ministry of Sound in this scheme."

Peabody went on to outline some of the acoustic challenges of integrating a nightclub in a primarily residential development, as well as the impact of recent Government changes to the social housing regime.

Mr Meredith added: "Last year the announcement of new legislation to reduce social housing rents over the next four years prompted a review of this development.

"We have been open and honest with Ministry of Sound about this, informing them back in November 2015 of the potential implications.

"We have now calculated that the impact of rent reductions on the Borough Triangle project is in the region of £6 million.

"This is a new factor, which none of us could have foreseen, and is compounded by our concerns around speculatively investing in such a high risk and uncertain technical exercise."

Peabody is chaired by crossbench peer Lord Kerslake, who has led efforts in the House of Lords to amend the Government's controversial housing reforms.

Since Mr Meredith's letter planning agents DP9 have also written to Southwark to clarify that Peabody "remains committed to the site" and "devising an exemplary development" with fresh proposals expected in the "near future".

Meanwhile the site will continue to host pop-up events, with the latest being Mercato Metropolitano of Turin which will bring a new food and drink venue to Newington Causeway as well as a temporary cinema, nightclub and hotel.