The Duke of Gloucester visited Bankside last Wednesday to unveil a panel in Cathedral Square marking the 40th anniversary of the Jubilee Walkway created for the Queen's Silver Jubilee in 1977. 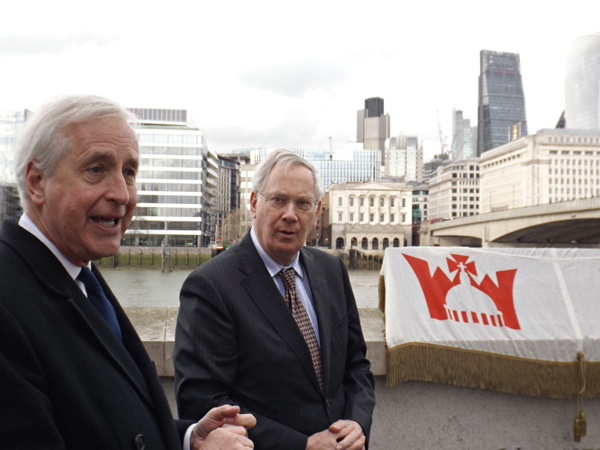 Hugo Vickers, chair of the Outdoor Trust, and the Duke of Gloucester 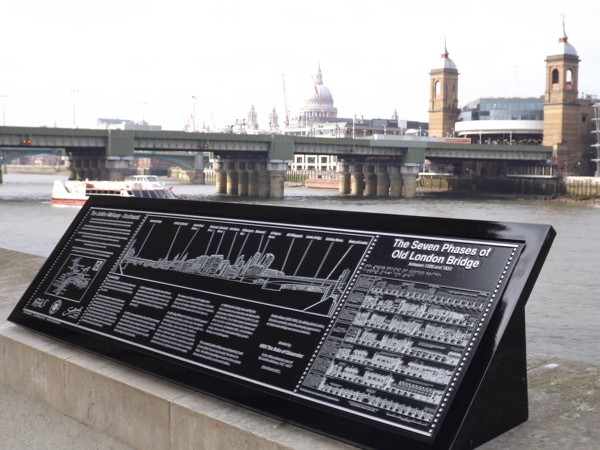 The Queen inaugurated the route, first known as the Silver Jubilee Walkway, in June 1977.

The highlight of the new interpretation panel, depicting the river view from Cathedral Square, is a reproduction of the seven phases of London Bridge from 1209 to 1831 drawn by Gordon Home.

Gordon Home (1878-1969) was a writer and artist who produced many pen and ink sketches of cathedrals, including Southwark, for A & C Black, J M Dent and other publishers.

The seven bridges drawing first appeared in Gordon Home's book Old London Bridge which was published in 1931 to coincide with the centenary of the seventh crossing being opened by William IV.

Gordon's son Gospatric Home told guests at last Wednesday's unveiling that it had been reproduced in a huge size on a wall at The Mermaid Theatre which stood in nearby Puddle Dock on the north bank.

Mr Home recalled that it was also reproduced on a metal plate attached to a stone from the 1831 London Bridge which was left behind when the main structure was moved to America in 1971. For the many years this block of granite has been in Cathedral Square.

The plate was found to be in a very poor state by Gordon Home's great grandson Reuben during a visit which he made whilst killing time before a visit to The Shard.

This discovery has led to the seven bridges drawing being included on the new plaque near the old stone.

The panel is dedicated to Sir James Swaffield who in 1977 was Greater London Council director general and Chairman of the Jubilee Walkway Trust.

The plaque, designed by illustrator Paul Waters, has been made possible with the support of the Gordon Home family, Southwark Council and United St Saviour's Charity.

The Duke was welcomed outside the cathedral courtyard by Deputy Lieutenant of Greater London Kevin Traverse-Healy and Hugo Vickers, chairman of The Outdoor Trust which looks after the Jubilee Walkway signage and promotion.

Afterwards His Royal Highness was entertained to tea at The Mug House under London Bridge before visiting the Sam Wanamaker Playhouse at Shakespeare's Globe.

• The Jubilee Walkway logo on waymarks pointing inland around buildings and vacant sites at many points along the south bank led to calls in the 1980s for a continuous riverside path between Westminster and Tower Bridges.

• Two years ago a sundial was unveiled next to Potters Fields Park in tribute to Max Nicholson, one of the originators of the Jubilee Walkway.