Southwark Council is forming a 'multidisciplinary team' to tackle to problems caused by buskers on Bankside this summer, as local residents press the authority to take action on their complaints of noise nuisance. 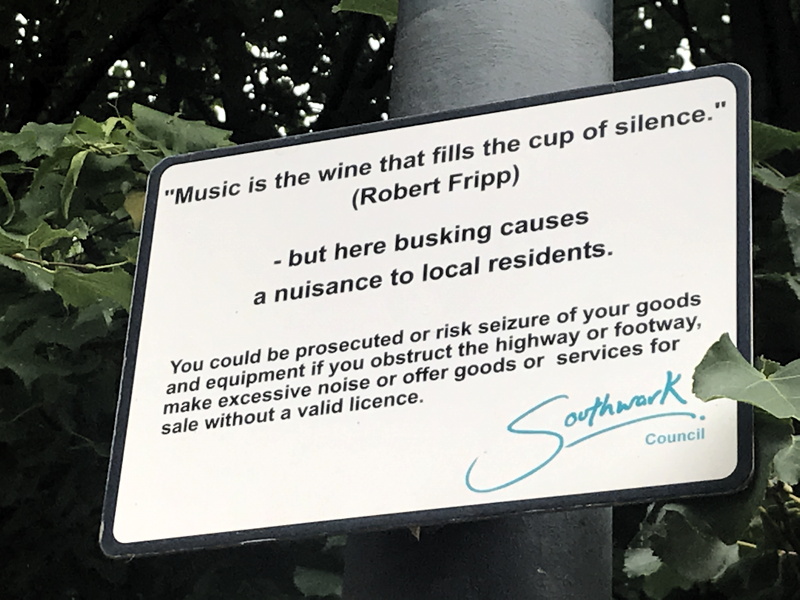 "Dozens of residents who live in Bankside, by the Jubilee Walkway, have for many years been negatively impacted by unending amplified music, which regularly continues past midnight," said Mr Eden.

He asked: "What measures are available to the council including measures it can employ with other relevant authorities, to address the debilitating effect of busking?"

Cllr Wingfield replied: "Buskers are difficult to regulate. Legal processes require that the individuals suspected of committing a crime are identified by their name and address. Council officers have responsibility for investigating complaints about buskers but have no powers of arrest and cannot require that an individual disclose their name and address. In order to do this the Police must be present. Buskers are also a popular attraction within larger cities. They are often supported by passers by as officers attempt to regulate busking activity which can create a difficult environment and often officers are filmed whilst conducting this aspect of their work."

He continued: "Where buskers are causing disturbance late at night then residents should contact Southwark's noise and nuisance team to make a complaint at the time they are being disturbed, via the call centre on 020 7525 5777. This will allow officers to give formal warnings and, if necessary, prosecute severe or repeat offenders.

"At other times of the day wardens, highway enforcement officers and anti social behaviour officers are available to tackle other aspects of nuisance and anti social behaviour that may be caused by buskers. Officers will engage with the busker and ask them to desist with the nuisance/anti-social behaviour. If the busker fails to comply with the request then the busker is asked to move on. If buskers fail to comply with officers' requests and a history of non compliance is established, then officers will consider remedies under the Anti-social Behaviour, Crime and Policing Act 2014 which may include issuing community protection notices."

Responding to a separate question tabled by Cathedrals ward councillor Adele Morris, Cllr Wingfield said: "Officers' ability to tackle nuisance buskers is hampered by a legislative framework that is weak with respect to this issue; hence our enforcement teams rely on using legislation that was never intended to tackle nuisances resulting from this type of street entertainment.

He added: "Despite the above officers will be convening a multi-disciplinary team to respond to the problems caused by nuisance buskers over the summer months."

In his supplementary question at council assembly, Mr Eden asked Cllr Wingfield to consider the use of a Public Space Protection Order (PSPO) to tackle the problem.

Cllr Wingfield has agreed to meet representatives of Bankside residents to discuss the idea in more detail.

In 2004 the council proposed a licensing regime for buskers on Bankside but decided instead to support a voluntary code of conduct endorsed by the then Mayor of London Boris Johnson.