Saint George and the Dragon at the National Theatre

Rory Mullarkey's new play is a timely exploration of identity and belonging. 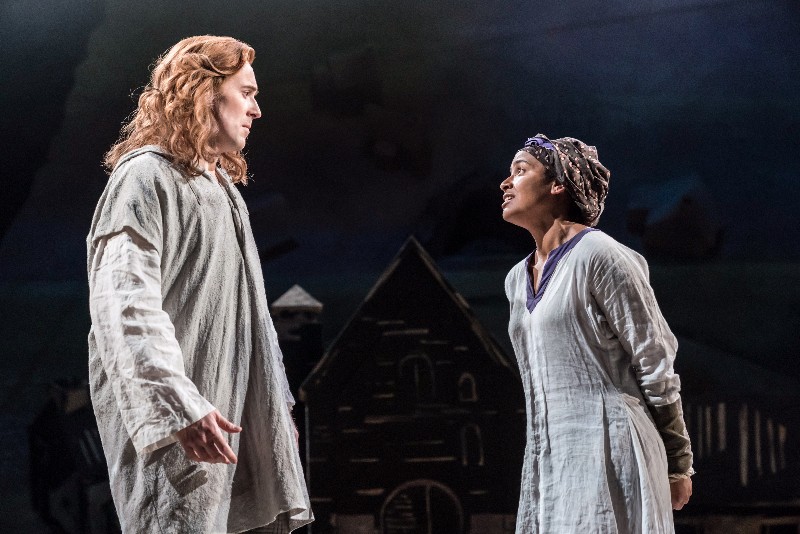 The tale focusses on the insidious dragons lurking throughout different periods of our island history.

The story begins as a stripped back traditional version set in a medieval, halcyon context when courageous George (John Heffernan) appears unarmed but as part of a brotherhood of knights.

The place is a sparse field with houses typical of middle Europe. The villagers, convened by the Brewer (Jeff Rawle), represent many trades which are then reinterpreted in later periods.

Learning that a fair maiden will be devoured by the dragon in manly disguise (Julian Bleach) or all will be destroyed, George responds bravely to the challenge.

He cleverly calls upon the villagers to arm him. They produce items related to their trades, including pots and pans, to protect him.

The fight is effectively off stage but with flaming dragon heads crashing dramatically to earth.

After his victory George reappears with the blood red cross on his shirt, to become the emblem of the place.

As the villagers grasp their victory they sing a song to the future while a Danny Boyle Olympic 2012 reminiscent scene transforms the meadow to a smoky industrial landscape.

George reappears to continue his quest, to slay the dragon, now reborn as a greedy uncaring capitalist, destroying the landscape for profit.

After the interval George is reinvented in a 21st century city of skyscrapers and colour-coded builders in hi vis jackets.

A comedy hen party hijacks George to the pub where the battle is revealed as a football match. England, implicit but unnamed, loses and all have to cope with the failure of a dream.

In this version George still does not win his fair Elsa (Amaka Okafor): she as a modern woman is keen to continue her independent working life.

The ending feels negative and downbeat, but all close their eyes to imagine the next future, maybe with hope, maybe not.

So, we have a serious tale of quest, challenge and a search for identity given a contemporary and humorous twist.

It is a modern parable which asks how we recognise and deal with our own dragons and those of where we live and the rest of the world. It reflects the variety and complexity of our lives. All have the responsibility to speak out and so become emboldened heroes ourselves.