Sarah Wheeler, founder of Mental Fight Club, the Dragon Cafe and the St George in Southwark Festival, has died from cancer. 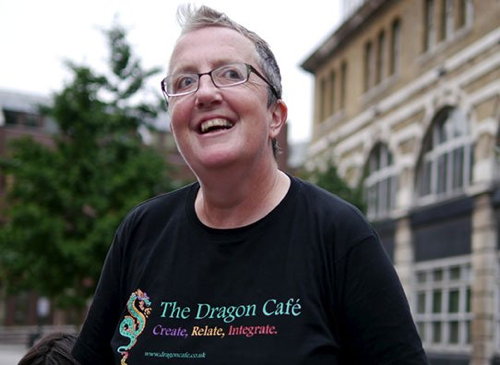 The first St George's Day event took place in Guy's Chapel in 2006 when Sam Riches spoke about the life of St George.

Dr Riches was again in Southwark on Wednesday to speak at the Urban Sacred conference when news of Sarah's death was announced. Speaking at the event, in Bankside Community Space, she acknowledged Sarah as an extraordinary person who inspired lots of people.

Sarah was also described as the 'founding genius' of what has become the St George in Southwark Festival based at St George the Martyr Church in Borough High Street.

But Sarah Wheeler was more widely known as the founder of Mental Fight Club, which uses art to explore mental health, inspired by the poetry of Ben Okri and William Blake.

She was also the driving force behind The Dragon Cafe which meets in the crypt of St George the Martyr on Mondays and offers creative activities to help people find mental wellbeing.

"An inspiration to us all," said the cafe in a statement.

"Throughout her illness she remained engaged in many activities and continued to speak up for those with lived experience of mental illness."

In 2015 Sarah was awarded the Honorary Liberty of the Old Metropolitan Borough of Southwark at the Southwark Civic Awards in recognition of her contribution to local life.

• Sarah's funeral will take place at St George the Martyr on Tuesday 3 May at 11am. All are welcome.