Tower Bridge illegal traders in game of cat and mouse

"Clever" illegal hawkers are playing a cat-and-mouse game of two halves on Tower Bridge by skipping across local authority boundaries to sell peanuts and trinkets. 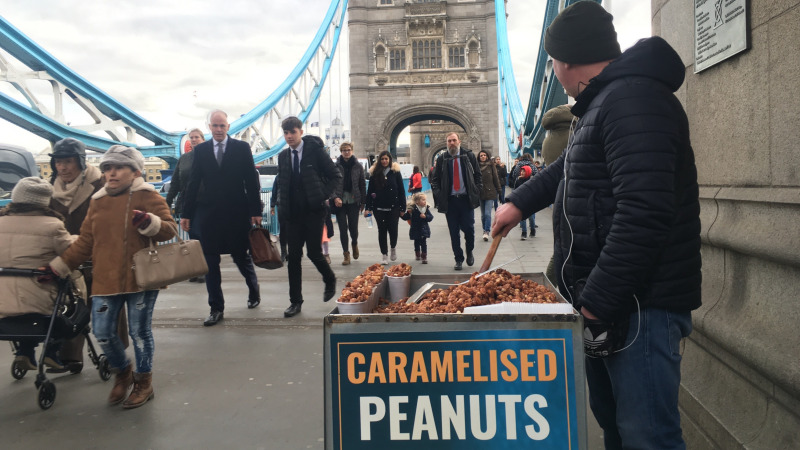 Tower Hamlets Council has been accused by the City of London Corporation of dragging its heels to accept the wealthier authority's offer to crackdown on hawkers on its half of the world-famous landmark.

While the City's charity owns the span, the bridge territory is split between Tower Hamlets and Southwark Council, which accepted the City's offer of help to police its half last May.

City leaders claim street hawkers have become so wise to the geographical quirk, they are setting up just feet from the halfway point of the bridge they know licensing enforcers can't cross over.

One peanut-seller who had set up cart on the Tower Hamlets half, who declined to give his name because his work is illegal, said hawkers were well aware of how to avoid authorities.

He said he had been there four or five years selling caramelised peanuts and almonds for about £1 – £1.50 a serving: "just to pay the bills."

But he claimed hawkers never deliberately set up halfway.

"No we never did that, seriously. No, no, no. I promise you we never stand on the middle. Sometimes, you know, when Tower Hamlets come on this side we go to the other side."

He said if the rules were changed so he could get a licence to trade "it would be saving my life".

"Living like this is very, very stressful going from that side, to this side. With a licence, I know I can plan from 9 o'clock to 5 o'clock and then I go home, I have some life with my family."

"I am trying to earn my living because I've got young kids and I am selling nuts. This is not any harm to people-they like it. We're not forcing anyone to come and buy."

But when the Corporation's planning and transportation committee was assured by staff on Tuesday that hawkers had promised as soon as they had powers to police the whole bridge they would "clear off and go," common councilmen burst out laughing.

The hawkers on Tower and Millennium Bridges are deemed a safety risk because they crowd packed spaces and some use gas bottles.

The Corporation is also helping Southwark enforce on its half of the Millennium Bridge.

Common councilman Marianne Fredericks told the committee she had spotted one peanut seller who appeared to be sitting in "no-man's-land".

"They are very clever. They know exactly where to position themselves and that fellow is probably about two feet into Tower Hamlets," a Corporation official told her.

A crackdown on the bridges in August 2017 resulted in 52 illegal traders being stopped, with three ice cream vans and five peanut trolleys seized, and 21 prosecutions launched.

The Corporation had offered to cross authority lines and help enforce the rules on both spans, including paying for a new licensing officer.

However it was still waiting for sign-off almost a year after it had raised the issue with Tower Hamlets. Councillors had approved the proposal in February, but the paperwork was still sitting with legal department, Tuesday's committee was told.

Tower Hamlets did not respond to a request for comment by deadline.