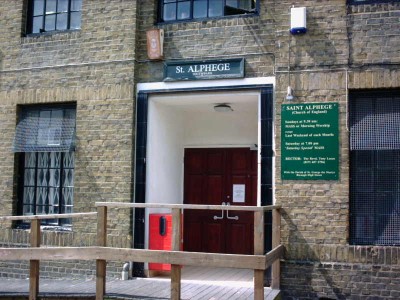 St Alphege stood at the south end of Lancaster Street from 1882 to just over a century later. The site, on the south-eastern corner of the King James Street crossroads, is now flats. The original Anglican red brick aisleless building was a well-known Anglo-Catholic shrine drawing people from all over London.

The easily missed new church is in King's Bench Street, round the corner from the former clergy house. The building, most visited when used as a polling station, has furniture from the old building.

St Alphege shares its parish priest with St George the Martyr in the Borough.