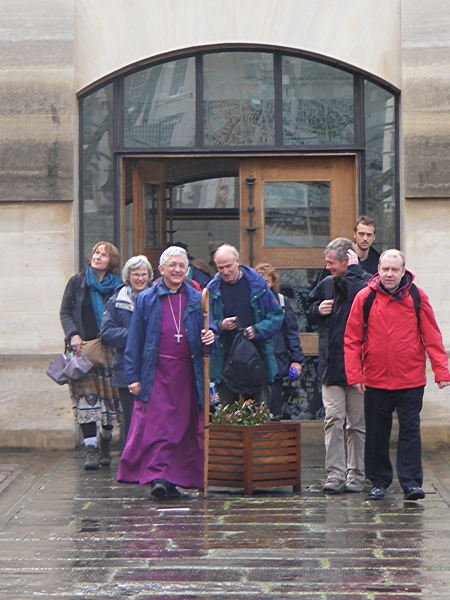 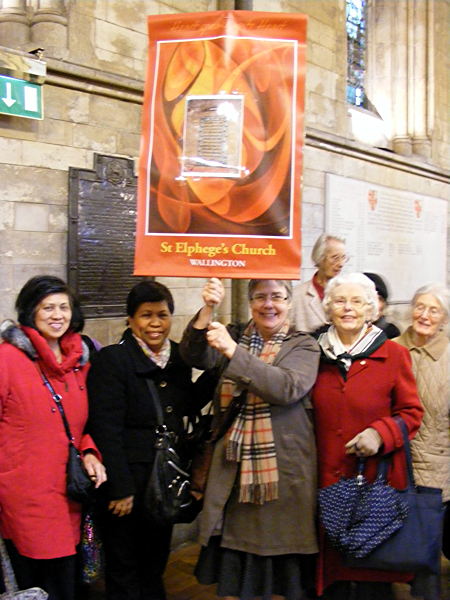 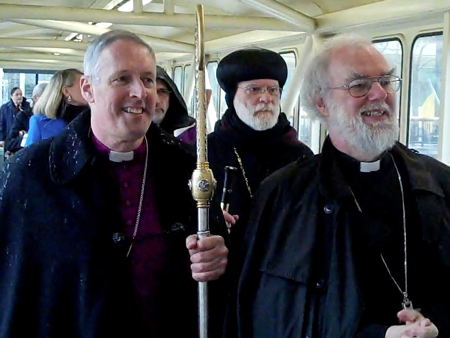 The Bishop of Southwark, the Coptic Metropolitan of Glastonbury and the Archbishop of Canterbury arrive at London Bridge City Pier 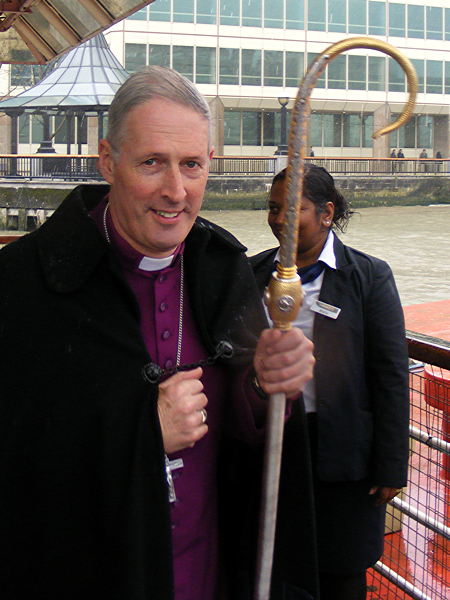 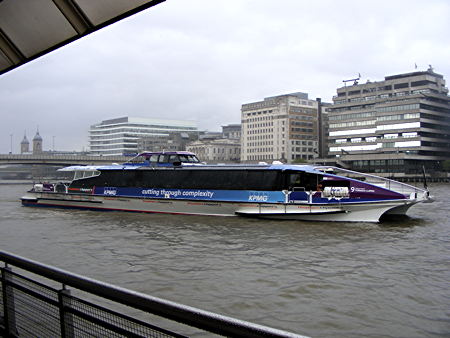 The passengers had earlier on Thursday morning been at Southwark Cathedral for a St Alphege's Day service on the 1000th anniversary of the martyrdom of Dr Williams's predecessor Alphege at Greenwich.

In 1012 the Archbishop of Canterbury was murdered by Danes occupying Greenwich. Alphege refused to allow his poverty stricken Saxon followers to raise a ransom. His successor St Thomas Becket, murdered 150 years later, invoked his name at the point of death.

"How wonderful [Alphege's] witness to Christians was in that generous act of refusing to allow his people to pay the ransom and suffer on their behalf," said the Dean of Southwark, Very Revd Andrew Nunn.

"What a privilege it is for the Diocese of Southwark to have St Alphege's Greenwich within the diocese."

Present at the cathedral was Southwark's Roman Catholic auxiliary bishop Patrick Lynch and Europe suffragan Bishop David Hamid. The Mayor of Southwark was joined by the Mayor of Solihull where the main Anglican church is dedicated to Alphege.

Bishop of Southwark Rt Revd Christopher Chessun, after referring to Alphege's suffering, said: "I ask you before you leave this cathedral church to pray for our brothers and sisters in Zimbabwe who know the costly reality of witnessing to their faith in Christ."

Afterwards many in the congregation joined Bishop of Woolwich Rt Revd Michael Ipgrave and the Dean of Southwark to walk to St Alphege Church in Greenwich.

Shortly after sailing, the pilgrim boat carrying the Archbishop was called back to London Bridge City Pier to allow the Bishop of Bergen, who had arrived at the pier moments after the boat had cast off, to board. He was due to sign a statement of intent with the Archbishop and Bishop of Southwark confirming today's strong Christian links with Scandinavia.

Also at the cathedral earlier was Fr Ray Andrews of St George the Martyr Church whose parish embraces Southwark's own parish of St Alphege.

St Alphege's Church stood on the corner of Lancaster Street and Borough Road from 1880 to 1965 when it attracted many visitors. The site is now partly occupied by Mathieson Court which is named after the last vicar Eric Mathieson.

The present St Alphege Church is in King's Bench Street. The Oratory of St Francis next door is the former Clergy House where Fr Mathieson lived. St Alphege's Day was being marked there by special services attended by the Franciscan Community.