Canon Richard Truss, who is retiring as vicar of Waterloo, has been reflecting on nearly fifteen years in what he once called "the most interesting parish in the country". 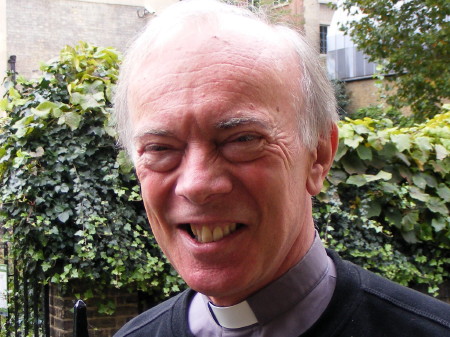 It was as chaplain to the National Theatre that Richard Truss first became really aware of St John's Waterloo. Although still Vicar of Shepperton, he had taken on the NT post following the sudden death of Fr Eric Mathieson, the last vicar of St Alphege Southwark.

Richard had long thought that St John's would be handy and was delighted to be offered the living in 1994.

By accepting he also became chaplain to the Royal Festival Hall, London Weekend Television and The Old Vic. So pleased was he to be offered the parish that he forgot to ask if the church was solvent. Soon after his arrival a man came in to St John's to turn off the electricity. Fortunately the curate had a cheque book and agreed to meet the sum on the spot.

But a much bigger problem had confronted the new vicar on his first morning. "I had to cross forty bodies just to get into church," he recalls when discussing Waterloo's homelessness problem. "And every morning we had to clear up."

Change began when one of the men volunteered to help. "His name was Bill Holly. He is one of my saints. We put him up in church and he became our caretaker. He was confirmed. But he had one small vice. He collapsed at the bookies in The Cut with a smile on his face. It was the only time he had won. But he died."

Richard conducted many services in the Bullring for homeless people living there. He thinks that building the BFI IMAX on the site forced the authorities to help. He also praises the Rough Sleepers Initiative. Most memorable is the Marianne Faithful concert to help the homeless. Although Richard recalls it as "wonderful", unexpected heckling from the gallery by visitors with too many cans of drink caused the star to use a four letter word in front of the Bishop and other VIPs. Later that night the vicar's son, acting as steward, was knocked out with a can during fighting.

Three archbishops have visited Waterloo during Richard's time. Archbishop Carey celebrated an early morning Eucharist. His successor Rowan Williams phoned within two weeks of moving into Lambeth Palace and asked if he could come. This resulted in the congregation finding an Archbishop of Canterbury presiding unannounced at the Mothering Sunday service.

Archbishop of York John Sentamu came to meet the Ugandan congregation which gathers at St John's once a month. It was this association which led to a visit by the Kabaka of Buganda and his Queen, Sylvia, who held court at the vicarage in Secker Street.

Princess Alexandra, whose mother Princess Marina had known the parish, has given much support by visiting three times. First she marked the St John's restoration, then the Festival of Britain anniversary and more recently opening of the modern St Andrew's Church in Short Street.

St Andrew's is in the heart of the estate sold by the Church Commissioners. Richard joined the unsuccessful campaign to save this housing from being sold.

He chaired the Waterloo Community Regeneration Trust whose legacy includes the Waterloo Time Bank and SE1 United. "I think we did some good things in Waterloo," he says. "We put money into the Millennium Green."

Kate Hoey MP describes him as "always on the right side" and "an amazingly involved vicar who will be missed terribly".

Upstairs the church has hosted drama including a Young Vic production and many controversial speakers such as American Bishop Jack Spong.

Since 1994 the parish population has almost doubled and the congregation increased. "It has become a very expensive place to live," Richard observes. "But there is a true mix still. It was a cultural arts centre when I came. It is a wonderful lively community.

"I hope the area goes on being a really vibrant place and I hope the community is strong within it. There have been lots of tensions but tension is a sign of a very healthy and active community."

It's maybe appropriate that the parish boundary runs into the middle of the river for its vicar is a descendant of the City of London's famous Navigation clerk of works Charles Truss. There is even a Truss's Island. Next week Richard moves back upstream to retirement at a cottage close to the water in Weybridge.

He has already handed on his original Waterloo post at the NT. The theatre is giving him a farewell party later this year and he admits that it will be very difficult coming back and not being part of the community. "I have really enjoyed it."

The Bishop of Southwark, who recognised Richard Truss's ministry by making him an Honorary Canon of Southwark, will be present at St John's Church on Sunday 12 October for his last service as vicar which begins at 10.30am.