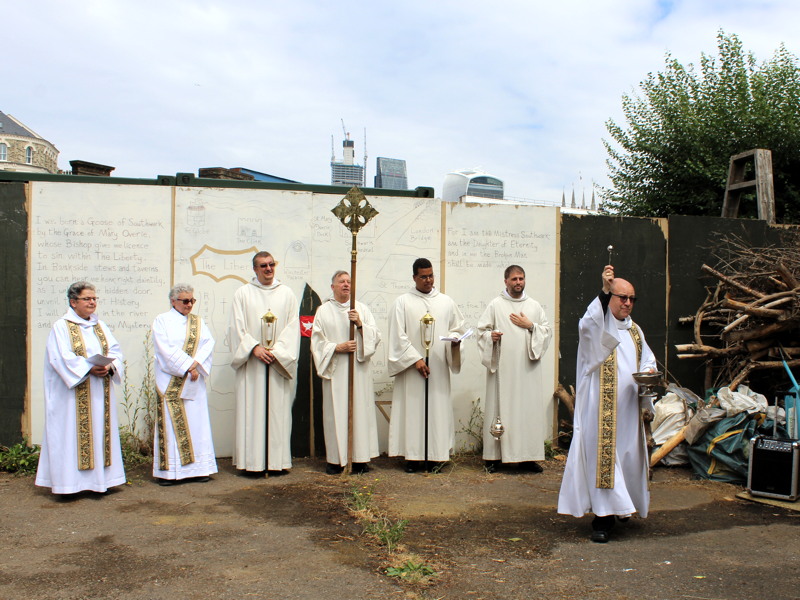 For the fifth successive year, The Dean of Southwark, the Very Revd Andrew Nunn, conducts a special service at Crossbones, the unconsecrated outcasts' burial ground.

The 'Act of Regret, Remembrance, Restoration' expresses the church's regret for the treatment of the 'Winchester Geese', the sex workers who worked in the Bankside brothels licensed by the Bishop of Winchester, yet were allegedly denied Christian burial. It's also a powerful statement of Southwark Cathedral's support for the protection of Crossbones Garden.

The service will be followed by a short tour of Cross Bones, performances of poems and songs inspired by the graveyard, and a picnic in the garden.

12.30 The Dean and clergy leave Southwark Cathedral in procession. (You can join the procession on the west side of the Cathedral, or gather to greet them at Crossbones)

1pm The Dean conducts the 'Act of Regret, Remembrance, Restoration' in Cross Bones Garden of Remembrance

1.30 A short guided tour of Cross Bones history and myth

2.30 After the performance there'll be a picnic in Crossbones Garden to celebrate St Mary Magdalene's Feast Day (which falls on 22nd July) - and John Crow Constable's 67th Birthday!