A pupil from London Nautical School who set up a t-shirt design business is one of the faces of an ad campaign showcasing the successes of state secondary schools. 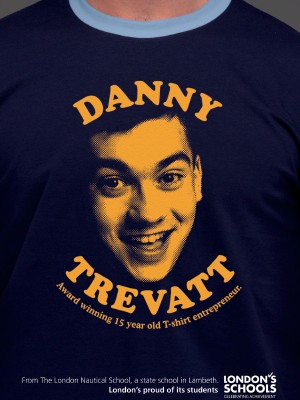 16-year-old enterprise award winner Danny Trevatt is one of eight London students whose talents, nurtured by their schools, range from maths and business through to sport and the arts, feature in the posters which will appear across the transport network.

Trevatt was managing director of D-Zine, a T-shirt design business he set up with fellow pupils at the Stamford Street school.

This gave rise to work for external clients, including a consortium promoting higher and further education in South East London which ordered 1,000 styled T-shirts.

The ad campaign aims to raise awareness of the opportunities available to young people in the capital's state secondary schools which are among some of the best in the country. In one in four London Schools 70% or more of pupils now achieve at least five or more good GCSEs, nearly double the number in 2001.

Leading London advertising agency Leo Burnett and media sales company Viacom Outdoor have partnered with the Department for Education and Skills to deliver the creatives and advertising space.

"I am delighted to launch this innovative campaign," says schools minister Lord Adonis. "The schools featured provide just a taste of the richness of talent and diversity which can be found in London's state secondary schools.

"I congratulate the London schools and their pupils featured in the campaign on their achievements. I hope the achievements of these students will be seen by fellow students travelling by bus and tube and inspire them on their own road to success."

Millions of Londoners will view the advertisements which are located at 12 underground stations, including Waterloo and Victoria, over the next two weeks. In addition two wrapped London buses will roam the Capital over the next three months.