A 40-metre Y-shaped wind turbine capable of powering 25 homes could be placed in front of City Hall as part of a plan devised by the architects of the London Eye. 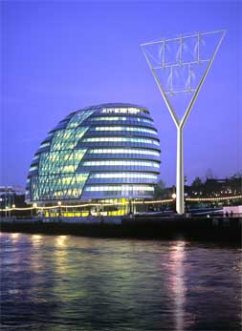 A group of London designers, architects and engineers led by David Marks and Julia Barfield have unveiled The Beacon, which they claim is a visionary new form of urban energy generation.

Their intention is to site The Beacon at prominent locations in London, such as the riverside walkway in front of City Hall near Tower Bridge.

"Wind energy is one of the best forms of renewables around," explain Marks and Barfield. "But most wind turbines are being planned in remote locations without any existing infrastructure. This isn't efficient as 30% to 50% of energy gets lost through transmission. We believe cities like London should take much greater responsibility for their own energy generation. London has a unique opportunity to make a difference in time for the Olympics."

The wind turbines can become suspended video screens or colour-change lighting displays, thanks to LEDs integrated within the blades. Its designers hope that it will be used a few times in the year for celebrating important national events or sporting occasions.

The Beacon has not met with universal acclaim; Mark Hedges, editor of Country Life magazine, likened the design to "a giant fly-swatter".