Radical green initiatives at the Elephant and Castle

The Elephant and Castle regeneration is to feature sustainable infrastructure on a scale unprecedented in the UK under plans agreed by Southwark Council's ruling executive. 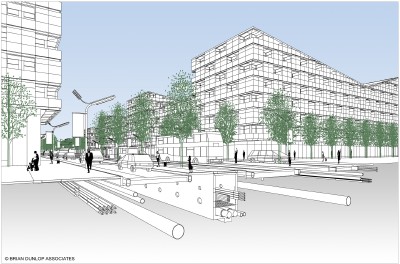 Southwark Council will embark on a Europe-wide search for partners to develop sustainable infrastructure for the £1.5 billion Elephant and Castle regeneration scheme.

The council has published plans to establish a Multi Utilities Services Company (MUSCo) to provide locally generated heat, cooling and electricity for the thousands of additional homes and businesses planned for the area.

"We have made a commitment to keep carbon emissions to their current levels despite almost tripling the number of homes and businesses in Elephant and Castle," explains Cllr Richard Thomas, Southwark's executive member for regeneration.

"This means coming up with creative ways of providing locally generated heat and power. We are in a unique position to be able to build this into the plans for the Elephant and Castle regeneration scheme before a brick is laid.

"The scheme will set new standards in green development on a scale not previously seen in the UK and will demonstrate that building new homes and businesses can be compatible with protecting the environment."

The planned development means it will also be possible to simultaneously install infrastruture to supply 'green' water extracted via boreholes from an underlying chalk aquifer for non-drinking water uses, such as toilet flushing and irrigation.

The entire development will be connected with a high bandwidth fibre optic cable network, enabling energy management, intelligent building technology and the next generation of entertainment and connectivity for residents and businesses.

The MUSCo plan also includes the use of renewable energy sources and combined heat and power, and automated waste management.

The council claims that the scheme will be at the forefront of sustainable development in the UK by ensuring that there is no increase in carbon emissions despite a 270% increase in floor space in the development.

Southwark has published a Prior Information Notice under the European Procurement Directive announcing that it will shortly start formal arrangements to establish the MUSCo at the Elephant and Castle.

It is intended that partners will be selected by July 2007 and construction of the energy centre and plant will begin in 2009 to coordinate with early highways work.

Last week the council released documents marking the third and final stage of its European procurement exercise to find a commercial partner for the £1.5 billion regeneration of Elephant and Castle.

The documents contain results of three years of detailed design and technical assessment of Elephant and Castle, undertaken by the council and its professional team.

The developers still competing from an original shortlist of eight are:
• Key Property Investments (a joint venture vehicle between St Modwen and Salhia)
• Lend Lease Europe Limited (in collaboration with First Base and Oakmayne)
• Oceancrest (a consortium of Blackfriars Investments, Le Frak Organisation, Chelsfield Partners and Glebe Holdings)

The developers' submissions are due back to the council by 31 October ready for scrutiny by the council's executive committee around the turn of the year.