Workers and residents learn how to be safer in the city

More than 350 local workers and residents braved the July heat to visit the Safer in Your City tent at More London to find out more about how to keep themselves - and their property - safer in their city. 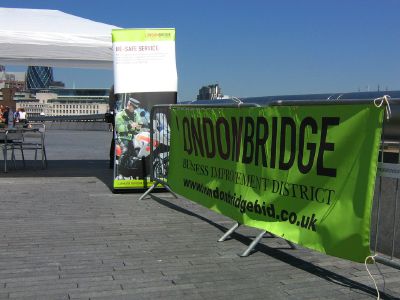 The lunchtime event, organised by the Metropolitan Police and London Bridge BID Company in association with More London and the Safer Southwark Partnership, offered an opportunity to ask about local crime and safety issues, including bag-snatching and other petty theft and commercial burglary.

Local employees and residents picked up more than 230 free personal alarms and information on how to keep cycles safe. The London Bridge BID Company also handed out posters with key police and other agency contact numbers.

The surveys showed that while most people in the area feel safe or very safe in the area during the daytime (97%), this number dropped to 69% in the evenings – surveys showing that bad lighting, grubby viaduct tunnels, dirty and unkempt public stairwells and the lack of CCTV systems had an effect on perceptions of safety in the area.

Survey respondents were entered into a draw for a free three course meal for two at the Londinium restaurant at the London Bridge Hotel.

The winner of the draw was Paul Armer from CQG International based on St Thomas' Street.