Bermondsey Street gastropub The Garrison has unveiled its newly refurbished interior - and announced that it's becoming a non-smoking zone. 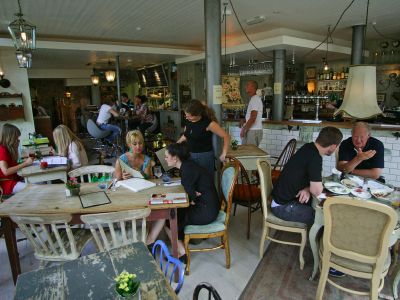 The change in policy at The Garrison pre-empts the nationwide ban on smoking in public places due to come into force next year.

"The decision to go smoke-free has been a difficult but considered one," explains managing director Adam White. "As a fairly small but very busy gastropub, we are increasingly being asked by our customers to adopt such a stance – particularly as the draw to visit The Garrison is now so heavily food-led."

Business partner Clive Watson added: "Having now invested significantly in a refurbishment, and re-launched with a fresh lick of paint and a fresh start, we felt now was a good a time as any to lead the way as a non-smoking gastropub."

The Garrison was closed for a week at the end of July for the refurbishment, the first revamp in the three years since it opened in August 2003.

White and Watson say that reaction to the new look has been very positive and, so far, locals and regulars are in full support of the new take on smoking.