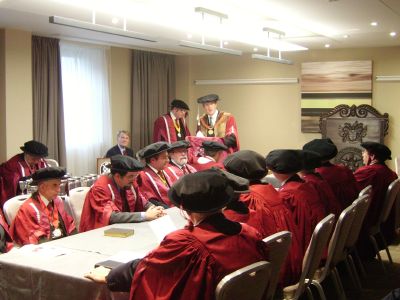 The annual sitting of the Guildable Manor's Court Leet took place at the new Hiton hotel at More London.

The court was presided over by the High Steward of Southwark Peter Beaumont QC, Recorder of London. Also in attendance was the High Bailiff of Southwark Charles Henty, the Under Sheriff and Secondary.

Judge Peter Beaumont's charge to the court took the form of an address on the development of the jury system.

Most of the 65 tenants summonsed to attend as Jurors were present including Southwark councillor Ian Wingfield and Southwark parish clerk Robin Sherlock.

In the previous years the ancient court has sat at Borough Market, City Hall and Glaziers Hall.

Officers of the manor had visited the Hilton last month to conduct an Assize of Buildings to mark its opening. In the presence of the Mayor of London Ken Livingstone and the Mayor Southwark Paul Kyriacou, a presentment and fine of forty shillings was levied against the More London development. Afterwards officers conducted the Assize of Ale at the bar and pronounced beveridges "fit and wholsome for manys bodie".