"Here we are on page 46 and we're only now getting to something...," writes Pete Brown. This book is a ramble around the Borough and sometimes you feel as if you might be in the George listening to the author talking about the area. 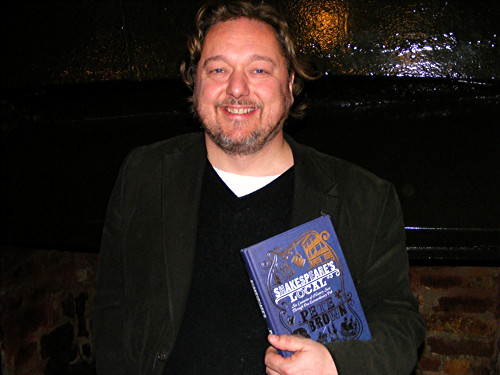 Pete Brown at the George Inn

He admits that he has no evidence that Shakespeare ever drank at the George Inn which has been rebuilt since his time. But Pete does come up with an interesting suggestion that the inn is mentioned in one of the plays.

He reminds us that for years until recently the inn was the focus for St George's Day celebrations when a procession from Bankside would arrive ready for the performance of a Shakespeare play. The book points out that there is an echo if this today with the annual Bankside Twelfth Night celebration ending in the inn's yard.

But much more evident is the lasting presence of Charles Dickens, who did know the building, and his fictional characters.

This enjoyable book paints an interesting picture of Southwark in the past being "home to prostitutes, beggars, bear pits, bull fights, bare-knuckle prize fights and disreputable inns". The author has done a good job not only in chronicling the inn's long history but reading numerous documents including court leet records and old newspapers.

Being like a conversation with many asides he has much to say about Southwark today. Conceding that Shakespeare must have mostly dined at The Anchor on Bankside, he adds that today there is "an unspeakably ugly Premier Inn growing out of its backside'.

Borough High Street long had plenty of pubs because London Bridge closed its gates at night and those trapped on the south bank needed refreshment and beds. The Borough still has an above average number of pubs including two outstanding ones, along with the George Inn, acknowledged by the author: The Royal Oak and The Rake.

• Shakespeare's Local is published by Macmillan and is priced at Ł16.99.

• Shakespeare's Local will be BBC Radio 4's Book of the Week from Monday 17 December at 9.45am. Extracts will be read by Tony Robinson.