Borough Market will provide the backdrop for a daily TV show to be presented by Clarissa Dickson-Wright, Simon Rimmer, Tana Ramsey and Tom Parker-Bowles. 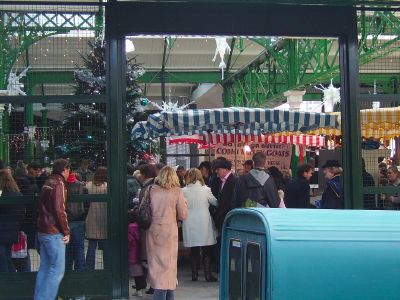 The refurbished Jubilee Market is hosting a special Christmas Market

The daily show will start its 12-month run on digital channel UKTV Food in April.

Provisionally titled The Market Kitchen, the programme will broadcast from a specially-created working kitchen at Borough Market.

The series will air as a one-hour primetime show with an extended daytime version broadcast the following day.

Regular features are likely to include interviews with Borough Market traders and producers and tips from stallholders on sourcing, preparing and cooking seasonal produce.

Each week the four presenters will be joined by a guest chef and food created during the programme will be sampled and judged by members of the public specially invited to join them in the working kitchen.

On Fridays and Saturdays throughout December a special Christmas Market will be operating in the newly refurbished Jubilee Market building on Cathedral Street. As well as a host of seasonal delicacies there is a programme of festive music.