The announcement comes just weeks after founder John Calder's 80th birthday but closure is being forced by a sharp rent increase rather than any thought of retirement. 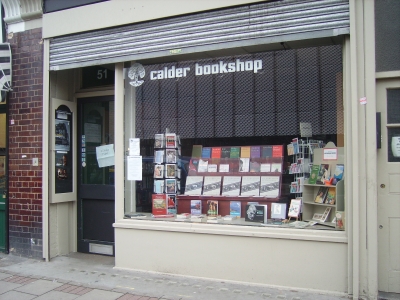 John Calder insists that the business will continue without a shop and he is in the process of negotiating for an office space. Manager John Cairney left the shop in The Cut a week ago to return to his native Scotland.

Southwark resident Barbara Robson, who has attended many of the shop's Thursday evening readings and talks, described Calder's as an asset to the area said the closure was a great loss. She praised John Calder's great enthusiasm and courage in coming to SE1 in the first place.

A regular attender from Waterloo said that the talks and recitals had given him his education.

"I am very sorry" said Marek Siemaszko of Tlon Books at the Elephant & Castle. "If this is the process of regeneration then the results are going to be dire."

Calder Publications was founded in 1949 and has had various addresses. It also admits to many earlier "perilous situations" including the occasion when a book received 36 libel writs.

Publisher and bookseller John Calder opened the Calder Bookshop opposite the Young Vic in The Cut in the summer of 2001. Tim Waterstone declared the shop open.

Last year a small theatre at the back seating just forty people became the home of the Godot Company, performing the works of Samuel Beckett.

Shortly after opening the shop he published his massive autobiography called Pursuit, The Uncensored Memoirs of John Calder. At the time the Sunday Times declared: "His place in literary history is secure".

• Marek Siemaszko, owner of the troubled Tlon Books, is launching a support group to campaign for recognition of trading difficulties during the Elephant & Castle regeneration programme.