Poet and publisher Alessandro Gallenzi has stepped in to ensure that the Calder Bookshop remains in The Cut and continues to be a focus for literary talks and events. 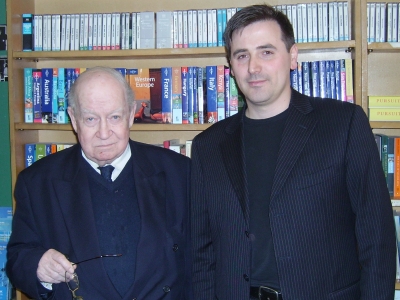 John Calder, founder of Calder Publications and the bookshop, was joined by Alessandro Gallenzi to make the formal announcement during last week's Thursday night poetry evening.

During February it was revealed that the shop would close unless a buyer was found. John Calder expressed concern about the loss of his shop manager who had moved back to Scotland and a pending rent rise. Last month Calder Publications sold its rights to Samuel Beckett's works to Faber.

Now Alma Publishing, founded by Alessandro Gallenzi, and Oneworld Classics of Oxford have stepped in to ensure that Calder Publications survives along with its well-known shop opposite the Young Vic theatre in The Cut.

Alessandro Gallenzi confirmed that Calder Publications will continue as a separate company and with its own imprint. John Calder is remaining part of the company and host of the popular literary evenings.

"I expect to go on working for nothing for the new people but I'm going to give rather more time to my own writing and to my theatre company, the Godot Company" declared the 80 year old author and publisher.

The Rome-born and now Richmond-based Alessandro Gallenzi, who also founded the Hesperus Press, runs the Alma Press with his wife Elisabetta Minervini. 'Alma' is Spanish for 'soul' and was chosen to emphasise the importance they place in quality rather quick mass market sales.

Oneworld Classics is an independent publisher launched this year by Juliet Mabey and Novin Doostdar of Oneworld Publications and Alma Books.