The new eatery - operated by D&D London (formerly Conran Restaurants) - will open in May in the space formerly occupied by the People's Palace restaurant. 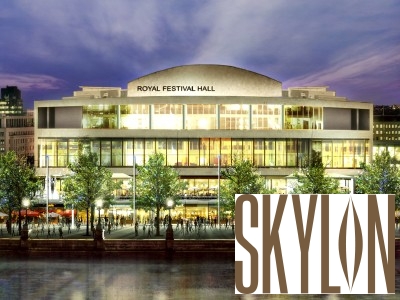 Located on level three of the refurbished Royal Festival Hall, Skylon will offer a spectacular panorama of London's skyline with floor to ceiling windows overlooking the River Thames.

The restaurant is named after the celebrated towering metal sculpture designed by Powell and Moya which, like the Royal Festival Hall, was one of the centrepieces of the 1951 Festival of Britain.

Skylon will open in May, ahead of the full reopening of the concert venue in June.

"I'm so excited to be joining Skylon," says Helena Puolakka.

"It's always been my dream to be involved with the launch of a restaurant on such a grand scale. I am also looking forward to sourcing seasonal ingredients from Europe."

Conran & Partners has designed the interiors and graphics for Skylon.

Recently they announced a rebrand of the company – which also owns the cluster of restaurants at Butler's Wharf including Le Pont de la Tour and Cantina del Ponte – to D&D London.