This summer Southbank Centre will host a series of special events to mark the 60th anniversary of the Festival of Britain. 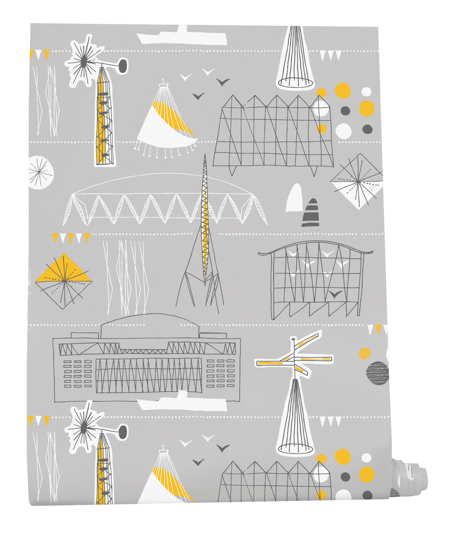 Festival wallpaper by Mini Moderns is now on sale

The season runs from the Easter weekend until early September and includes an exhibition in the Royal Festival Hall designed by Wayne and Geraldine Hemingway featuring artwork and memorabilia related to the Festival of Britain.

Themed weekends throughout the spring and summer include a Royal Wedding Weekend featuring Billy Bragg and Wayne and Geraldine Hemingway's Vintage Festival at the end of July.

The anniversary celebrations are sponsored by Mastercard as part of a three-year deal to support summer festivals on the South Bank. Both the credit card company and the Southbank Centre are chaired by Rick Haythornthwaite.

"The 1951 Festival of Britain was a landmark event, visited by millions, and its legacy and influence continues to live on," says Jude Kelly, artistic director of Southbank Centre.

"Following the destruction of the Second World War, a festival of idealism, optimism, imagination and innovative design was created to pave the way for a better future for the country.

"Coinciding with another period of austerity, Southbank Centre's anniversary festival will evoke the spirit of 1951 by celebrating Britain's leading creative and cultural role and by welcoming people from around the country and beyond to take part."

The 1951 festival was created to give Britons a feeling of recovery and progress following the Second World War, as well as celebrating the centenary of the 1851 Great Exhibition.

At the heart of the nationwide Festival was the South Bank Exhibition, situated on what is now Southbank Centre. The exhibition was an unprecedented extravaganza, filled with new technology, science, art, design, and constructions such as the Dome of Discovery and the Skylon as well as the Royal Festival Hall.

It was attended by more than eight million visitors and laid the foundations for the arts centre as it is today.

Southbank Centre is inviting members of the public to submit their memories and personal photographs, letters and home movies of the 1951 South Bank Exhibition.

There are also plans for a collaboration with the Mayor of London's Story of London festival this summer.

Skylon could be rescued from River Lea

Jude Kelly revealed on Wednesday that the remains of the Skylon structure could be retrieved from their resting place at the bottom of the River Lea this summer as part of the Festival of British Archaeology.

"The Skylon is like the Loch Ness Monster," she said, explaining that different parts of the structure had been sighted in different places at different times.

She confirmed that there are no plans to rebuild the structure on the South Bank.

The newly released 'Festival' wallpaper by Mini Moderns is a personal celebration of the South Bank exhibition.

The design features highlights of the 1951 exhibition. Geometric shapes interplay with abstract representations of the Skylon, the Dome of Discovery and the Royal Festival Hall. Its linear forms reflect the modernist architectural vision of structures specially commissioned for the festival such as the Transport Pavilion and The Lion and the Unicorn Pavilion.

"The 60th anniversary offered us the perfect opportunity to create a very personal homage to a piece of Britain's design history that has had such a strong creative influence on the Mini Moderns style".

'Festival' is available in three colourways priced £50 per roll from www.minimoderns.com