The South Bank Centre has announced details of the reopening of the Royal Festival Hall and confirmed its rebranding as the Southbank Centre. 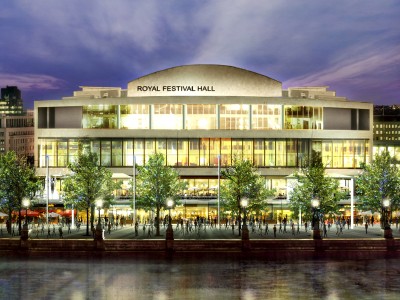 Along with the adjacent National Film Theatre – which is rebranding as BFI Southbank – the South Bank arts complex has changed its marketing name to use the contracted single-word Southbank form.

"The change in the visual presentation of our name [to Southbank Centre] has been done specifically to distinguish ourselves from the broader South Bank area," an SBC spokesperson told the London SE1 website.

"Southbank Centre needed a new look to convey its renewed creative energy and visually unify the site which has undergone a dramatic transformation.

"Part of the design brief was to create a new signage and wayfinding system for our 21-acre campus, which will be fully unrolled nearer the re-opening of the Royal Festival Hall. We are very pleased with the results.

"This new visual identity unifies all our activities and venues and is a more accurate representation of the work we do as an organisation.

"The work has been carried out as part of the overall marketing budget and took about 18 months. Our marketing team worked on the visual identity with specialist consultancy from Wolff Olins, Wood and Wood, and Rivermeade."

Southbank Centre bosses this week announced that the Royal Festival Hall will re-open on schedule – following two years of redevelopment – with a site-wide 'Overture weekend' in June.

"The programme we are announcing today is just the beginning and reflects an exciting change in emphasis at Southbank Centre," says artistic director Jude Kelly.

"We are committed to commissioning, creating, and developing work that will now be presented in some of the best facilities for the arts available internationally. Our extraordinary wealth of resident artists and orchestras, our global relationships and our spectacular site are unique in the world.

"We will ensure that Southbank Centre remains at the creative heart of London for generations to come."

Chief executive Michael Lynch added: "We promised that we would deliver this project on time and on budget, and I can say today that we can and we will.

With over 92% of the budget already raised, I am delighted to announce that we have been pledged another two million dollars, the largest single amount from the Kresge Foundation's challenge fund, towards our campaign – which will help enormously with the final fundraising push."

The Overture Weekend starts at dusk on Friday 8 June and continuing until dusk on Sunday 10 June. Every part of the site will become a platform for music and performance, from the Ballroom floor to the rafters of the Royal Festival Hall and spilling out into the open air onto the splendid riverside terraces. Working with Southbank Centre's programming team, amateur and professional choirs from all over the country will participate with world-class artists in the celebrations.

The South Bank's four resident orchestras, the London Philharmonic Orchestra, the Philharmonia Orchestra, the London Sinfonietta and The Orchestra of the Age of Enlightenment, with over 250 musicians, will play together for the first time in First Night, the opening concert at the Royal Festival Hall on Monday 11 June.

Casting starts this week for a brand new production of Oscar Hammerstein's 1943 musical Carmen Jones opening on Wednesday 25 July for a six-week run. The full scale of the Royal Festival Hall's state-of-the art production facilities will be deployed in this Southbank Centre co-production with Raymond Gubbay. The production will be directed by Jude Kelly, designed by Michael Vale and choreographed by resident choreographer Rafael Bonachela, and will feature the London Philharmonic Orchestra and the Philharmonia Orchestra alternating for the first time, under the musical direction of Simon Lee.

A series of 'Big Weekends' will make use of the centre's spectacular river frontage and open terraces, as well as all of its indoor venues. These will include Off the Wall, a free show created by the dancers and 'parkour' acrobats of Stan Won't Dance, who will collaborate with an international collection of circus artists and free-runners to create an unforgettable large-scale outdoor spectacular using the rooftops of Southbank Centre as its backdrop; World London, an innovative three-night World Music event tracing the origins of world music as it arrived in London, starting in the 1950s; a Gamelan weekend to mark the return of the Gamelan, a gift from the people of Indonesia to the people of Britain, in a spectacular all night 'Wayang' a Javanese shadow puppet play; and a season of classic silent films screened to live music performed by some of the finest Ugandan musicians who have made a speciality of this genre.

New associate designer Michael Vale will be designing and orchestrating the outside spaces, which in a tribute to the site's exuberant Festival of Britain origins will include artist-commissioned fountains, new gardens and temporary pavilions, served by improved river connections. Dramatic lighting of the site and its venues will be overseen by U2's lighting designer Willie Williams and will be a feature of the reopening.