Local MP Simon Hughes has been unanimously readopted as Lib Dem candidate for the renamed Bermondsey and Old Southwark constituency. 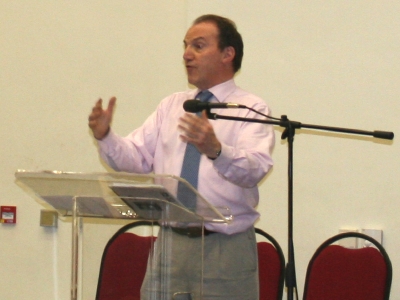 In his speech to local party members at the Salvation Army Hall on Princess Street, Mr Hughes reflected on his 24 years as the local MP and told members what a privilege it had been to represent the people of North Southwark and Bermondsey.

"It is a great privilege to have represented this constituency and its many communities since 1983," say Simon Hughes.

"There have been many positive changes during the last three decades, but there is still much to achieve. I look forward to working with my Liberal Democrat colleagues on Southwark Council to build on the work we have done already to tackle poverty and the years of underinvestment in council housing."

At the meeting Mr Hughes received the endorsement of local resident, broadcaster and writer Simon Calder. Mr Calder, who told the meeting that he had traditionally been a Labour voter, said: "If all politics is local, then Southwark and Bermondsey could not hope for a better MP than Simon Hughes."

The North Southwark and Bermondsey constituency will be renamed at the next general election and will in future be known as Bermondsey and Old Southwark.

The Labour Party has just published the timetable for the selection process to find a candidate to challenge Mr Hughes. In 2005 Kirsty McNeill bucked the national trend and achieved a 5.9 per cent swing from the Lib Dems to Labour.