Former MP Tony Benn was joined by Gill Hicks at the opening of a new exhibition charting the experiences of patients and staff at Guy's and St Thomas' hospitals. 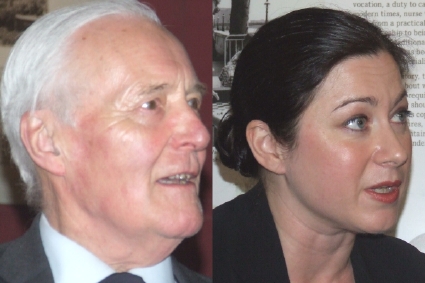 The exhibition at the Florence Nightingale Museum is the culmination of a Lottery-funded oral history project to record the memories of nurses and patients at SE1's hospitals from the 1930s to the present day.

Tony Benn told guests of his long-standing association with St Thomas'; his first memory of the hospital dates from the 1928 Thames flood (he was two and a half at the time) and his godfather's aunt was Florence Nightingale.

He was full of praise for the hospital that has treated him several times over the years: "What's so nice about the NHS is not the buildings, it's the people, the care, the men, the women, the love, the skill. It's about palliative care."

Gill Hicks, who lost both legs in the terrorist attacks in London on 7 July 2005, spoke about her gratitude to the ambulance crew who decided to bring her to St Thomas' rather than one of the nearer hospitals.

"I truly believe that it was a blessing to have been brought here," she said.

"I'd like to be St Thomas' number one fan, but I am sure that there are many and they deserve to have them," she told guests.

"I spent three months here – three wonderful months – which might sound strange given the circumstances in which I arrived."

The Hospital Voices exhibition includes photographs and documents relating to life at the hospitals, including nurses' record books, exam papers and correspondence.

These include reminiscences from broadcaster Jonathan Dimbleby who talks about the treatment his father Richard Dimbleby received at St Thomas'.

There is a computer terminal where visitors to the exhibition are invited to contribute their own memories.

Hospital Voices is at the Florence Nightingale Museum until 23 December.