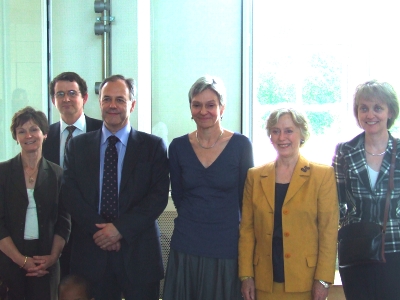 Siobhan Davies with members of the All-Party Parliamentary Dance Group

The parliamentarians were on a tour of dance venues in London.

During their visit to Southwark the MPs and peers saw excepts from the latest work of the Siobhan Davies Dance Company – Two Quartets – and toured the award-winning building.

Siobhan Davies Studios opened last year in the former annexe of Charlotte Sharman Primary School and now the dance company is launching a new project – funded by the Paul Hamlyn Foundation – with pupils at the neighbouring school.

"This unique opportunity to forge a real and working partnership between the school and the dance company will provide exciting and innovative opportunities for all involved," says headteacher Zoe Sharman.