39 Young Pilgrims from Southwark schools received certificates following the completion of their course on local history and promoting the area's attractions. 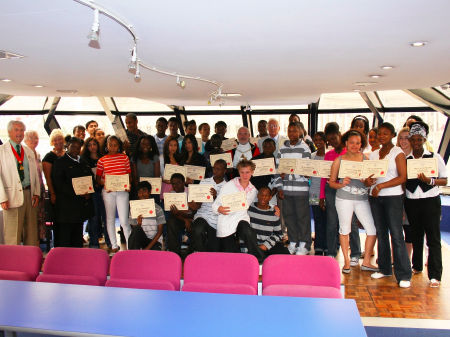 The ceremony, attended by four former Southwark mayors, took place on board a City Cruises vessel whilst it sailed upstream from Cherry Garden Pier to Westminster Bridge. As the ceremony began passengers saw Tower Bridge opening ahead.

The certificates were presented by Mayor of Southwark Bob Skelly who said that he had heard nothing but good reports about the course participants and praised project co-ordinator Veronica who he described as "the great motivator".

In November Southwark Young Pilgrims will be celebrating its tenth year with a fundraising dinner at Shakespeare's Globe.